Pyroelectric catalysis (pyro-catalysis) can convert environmental temperature fluctuations into clean chemical energy, like hydrogen. However, compared with the more common catalysis strategy, such as photocatalysis, pyro-catalysis is inefficient due to slow temperature changes in the ambient environment. Recently, a team co-led by researchers at City University of Hong Kong (CityU) triggered a significantly faster and more efficient pyro-catalytic reaction using localized plasmonic heat sources to rapidly and efficiently heat up the pyro-catalytic material and allow it to cool down. The findings open up new avenues for efficient catalysis for biological applications, pollutant treatment and clean energy production.

Pyro-catalysis refers to the catalysis triggered by surface charges in pyroelectric materials induced by temperature fluctuations. It is a green, self-powered catalysis technique, which harvests waste thermal energy from the environment. It has attracted increasing attention in clean energy production and reactive oxygen species generation, which can be further used for disinfection and dye treatment.

However, most of the currently available pyroelectric materials are not efficient if the ambient temperature doesn’t change much over the time. As the environmental temperature change rate is often limited, a more viable way to increase the pyro-catalytic efficiency is to increase the number of temperature cycling. But it is a great challenge to achieve multiple thermal cycling in the pyro-catalyst within a short time interval using conventional heating methods.

A research team co-led by Dr Lei Dangyuan, Associate Professor in the Department of Materials Science and Engineering (MSE) at CityU, recently overcame this obstacle using a novel strategy of combining pyroelectric materials and the localized thermo-plasmonic effect of noble metal nanomaterials.

The plasmonic nanostructures, which support the collective oscillation of free electrons, can absorb light and convert it quickly into heat. Its nanoscale size allows fast yet effective temperature changes within a confined volume, without significant heat loss to the surrounding environment. Consequently, the localized heat generated by the thermo-plasmonic nanostructures can be easily fine-tuned and turned on or off by external light irradiation within an ultrashort time interval.

Furthermore, the repetition rate of the nanosecond laser used in the experiment was 10Hz, which meant that 10 pulses of light were irradiated on the catalyst per second to achieve 10 heating and cooling cycles. This implies that by increasing the laser pulse repetition rate, the pyroelectric catalytic performance could be improved in the future.

The research team believes that their experiment results have opened up a new approach for improving pyro-catalysis by designing an innovative pyroelectric composite system with other photothermal materials. This substantial progress will make the future application of pyro-catalysis in pollutant treatment and clean energy production more feasible.

The findings were published in the prestigious scientific journal Nature Communications under the title “Accelerated pyro-catalytic hydrogen production enabled by plasmonic local heating of Au on pyroelectric BaTiO3 nanoparticles”.

The co-first authors are Dr You Huilin, from The Hong Kong Polytechnic University (PolyU), and Dr Li Siqi, then-postdoc in Dr Lei’s group. The corresponding authors are Dr Lei and Professor Huang Haitao, from PolyU. Other team members include Dr Fan Yulong, from the MSE at CityU, and collaborators from PolyU. The research was supported by the Research Grants Council of Hong Kong and the National Natural Science Foundation of China through the Excellent Young Scientists Fund. 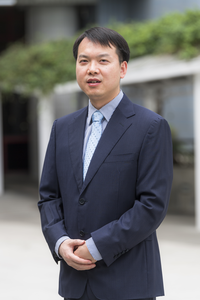