Imperial researchers have developed a low-cost, easy-to-manufacture stabiliser for broken bones to help in regions where such devices are expensive or in short supply and people sometimes resort to homemade options.

The stabiliser, known as an external fixator, holds broken bones in place with metal pins or screws attached to a surrounding metal frame.

When soft tissue is severely damaged together with bone, external fixators are the first step in keeping fractures in legs and arms in place before an operation to definitively fix the bones can be carried out.

However, their cost and low availability in many regions mean people resort to homemade or low-quality fixators that may lead to serious complications or improper healing.

The Imperial external fixator is currently being tested in Gaza and Sri Lanka, and since the invasion of Ukraine, more than 500 fixators have been manufactured in Poland to help with the crisis.

This fixator, details of which are published in Frontiers in Medical Technology, is low-cost and has a lightweight design that can be manufactured locally to international standards. The team developed the design and a toolkit to allow repeated precise manufacture of the fixator anywhere in the world, including in the least developed countries.

In Sri Lanka, it is being tested for road traffic accidents, which account for around 70 percent of fractures in low- and middle-income countries (LMICs). In Ukraine and Gaza, both regions with unpredictable demand and supply of such devices, it is being used for gunshot wounds and other conflict trauma.

Lead researcher Dr Mehdi Saeidi, from the Department of Bioengineering at Imperial, said: “We have managed to develop an external fixator that is one-tenth of the cost of commercial devices but with similar performance. This device can provide surge capacity for conflict zones or in response to unpredictable incidents and situations, which was the case with the war in Ukraine.”

The fixator is made up of four clamping systems and a rod, which can be manufactured from stainless steel and aluminium, which are readily available materials, using conventional manufacturing techniques, such as milling and turning.

However, because of the precision of the parts, initial tests showed that the fixator would need to be built by highly skilled operators or using advanced machinery. Dr Saeidi therefore developed a manufacturing toolkit with components including drill bits, a saw and cutting guides to make the manufacturing easier, faster and reproducible with high accuracy.

The fixator was then tested in cadaver leg bones, showing it had similar stiffness to commercial devices, as well as undergoing mechanical testing that simulated pressure on the device to show its ability to keep the bones in position over a longer term.

The device is now being trialled in three countries. The device was originally conceived in response to a reported shortage by partners in Sri Lanka, and with Dr Puji Silva at the University of Moratuwa, the Imperial external fixator and related designs are being tested.

In Gaza, in collaboration with Professor Ghassan Abu-Sitt at the American University of Beirut, the device is largely being trialled with gunshot wounds. This trial is also assessing the ability of the external fixator to be cleaned, sterilised and reused.

Professor Abu-Sittah said: “In previous wars hospitals in Gaza had run out of external fixators, which jeopardised patient care. Developing the capacity to manufacture fixators locally means that this will not happen again.”

A second trial will soon start with the devices fully manufactured in Gaza, in collaboration with the Islamic University of Gaza (IUG). In preparation, Dr Saeidi trained Dr Sadiq Abdelall from IUG on manufacturing the external fixator using the toolkit at Imperial.

At the outbreak of the Ukraine conflict, Imperial’s Professor Anthony Bull was approached by surgeons in Poland who urgently needed such fixators, resulting in more than 500 of the devices being manufactured for use in Ukraine. The drawings provided freely on Imperial’s website were all that was needed by the engineers.

Professor Jonathan Jeffers, one of the study investigators from the Department of Mechanical Engineering at Imperial, said: “This work, conceived years ago based on needs identified by our military and civilian trauma surgeons, shows how basic engineering can mitigate suffering in the most dreadful of situations. The Ukraine situation is exactly why this project was conceived and demonstrates the ability to respond to surge demand.”

The team now expects to roll out the design to more LMICs at a larger scale with the help of partners in the World Health Organization and the United Nations Development Programme. The work was funded by the NIHR (project reference 16/137/45). 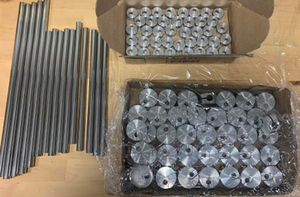 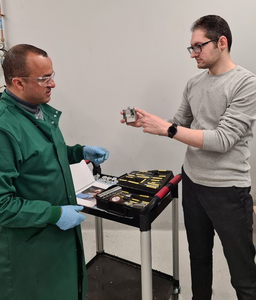