Munidopsid squat lobsters (from the family Munidopsidae) are among the most abundant decapods found at abyssal depths of the ocean. They are the most diverse squat lobster group in the East Pacific region and make their homes in one of the harshest ocean environments.

Squat lobsters, named due to the folding of the tail (or abdomen) beneath the body, are more related to hermit crabs than to well-known lobsters or crabs. There are more than 1,000 species of squat lobsters and they are found everywhere from cold Antarctic waters to tropical areas in the Indian, Atlantic, and Pacific Oceans. Their diversity is most striking, however, in the tropics of the West Pacific.

Every year dozens of new species are described, especially for deep-sea squat lobsters. Yet, the real diversity of these animals is poorly known as current classification has relied historically on the morphology, or character traits, of these animals. In a new study in Invertebrate Systematics researchers in the Department of Organismic and Evolutionary Biology (OEB) at Harvard University describe five new deep-sea squat lobster species. Combining molecular data and microCT their findings show a wider species distribution range and shallower genetic diversity, calling for a revision of the current classification of squat lobsters.

Lead author Paula Rodríguez Flores, postdoctoral researcher in OEB and Biodiversity Postdoctoral Fellow in the Museum of Comparative Zoology (MCZ) at Harvard, discovered three of the species in the Invertebrate Zoology collections of the MCZ. The specimens were collected during the last decade using remotely operated vehicles (ROVs) and the human-occupied vehicle (HOV) Alvin at hydrothermal vents, cold seeps, and other seafloor habitats in the Galapagos, Costa Rica, and California, during oceanographic expeditions by E/V Nautilus and Schmidt Ocean Institute. The expeditions were aimed at exploring and characterizing deep-sea biodiversity in the East Pacific.

Rodríguez Flores found the fourth and fifth species in the Benthic Invertebrate collection at Scripps Institution of Oceanography during a visit last year. The fifth species was a surprise. The specimen was collected in 1990, but was not recognized as unique until Rodríguez Flores closely examined it.

“It was super exciting finding three new species in the MCZ collections and the other two at Scripps,” said Rodríguez Flores. “This group is one of the few decapod crustaceans living at such depths where they are very abundant. There is a vertical distribution limit for these decapods where you don’t find any more at certain depths, which makes these animals really interesting.”

Rodríguez Flores, a taxonomist, was visiting several museum collections gathering material to study the taxonomy and systematics of this group found in several locations. She applied a molecular approach to the study of these animals by examining their  genetics. From the genetic data Rodríguez Flores and Senior author OEB Professor Gonzalo Giribet, Curator of Invertebrate Zoology and Director of the MCZ, discovered the specimens were very evolutionary divergent and their morphology did not match their genetics.

“While natural history collections host thousands of new species, it requires the eyes and the patience of trained taxonomists, like Paula, to bring them to our attention,” said Giribet.

“This finding rearranges the phylogeny of this group that was previously defined by morphological characteristics,” said Rodríguez Flores. “The evolution of this group was not fully understood until we started to include the genetic data which showed the current classification of these animals, based on morphology alone, does not reflect their evolutionary history.”

The researchers reconstructed the phylogeny of approximately 170 specimens from the Pacific coast, the Atlantic and the Indian Ocean. “We found a general pattern in which specimens living below one thousand meters present shallower genetic distances and an overall wider geographic distribution range. Especially when we compare with the related species that live in four hundred meters or shallower depths,” said Rodríguez Flores.

From the reconstruction they found that the current systematics of squat lobsters needed a revision. For instance, their analysis showed the East Pacific Janetogalathea californiensis, currently classified in the family Galatheidae, is more closely related to munidopsids. They also found that neither the genus Munidopsis nor the family Galatheidae are monophyletic, meaning they did not descend from a common ancestral group as previously believed.

“Some of these abyssal species had wider distribution ranges and shallower genetic diversity in comparison with munidopsids from continental shelves and slopes,” said Rodríguez Flores, “this suggests the role of deep-sea colonization in the speciation patterns.”

Rodríguez Flores Used the MCZ digital image facility to create three dimensional models using microCT to illustrate the external morphology of the intact new species. The models are publicly available in the MCZ’s database for everyone to examine.

The new species were named in honor of the researchers who led expeditions or were collaborators, the expedition ship, and the unique locations they were found. Munidopsis girguisi honors OEB Professor Peter Girguis, Chief Scientist on the E/V Nautilus oceanic expedition that collected many of the species used for the study. Munidopsis girguisi had a fuzzy coating of microbes, which matched well with Girguis’ interdisciplinary deep-sea microbiology research.

Munidopsis cortesi and Munidopsis hendrickxi honor deep-sea crustacean researchers Professor Jorge Cortés-Nuñez at the University of Costa Rica and Professor Michel Hendrickx at the National Autonomous University of Mexico. Munidopsis nautilus pays tribute to the ship E/V Nautilus, whose ROV Hercules collected the only known specimen of this species. Finally, Munidopsis testuda (Latin for “turtle”) references both the scaly texture of the squat lobster’s shell and the iconic giant tortoises of the Galapagos Islands, where this species was collected.

“We are fortunate to have a postdoctoral program like MCZ's Biodiversity Postdoctoral Fellowship that attracts young talent to continue making these types of discoveries about the hidden diversity of our planet,” said Giribet.

Approximately one million species face a threat of extinction, with 40 percent of all species at threat for extinction by the year 2100. The deep sea represents more than 70 percent of Earth’s surface. Traditionally considered to be a vast homogeneous environment, the inclusion of molecular data in systematic research has allowed scientists to discover regional biodiversity and endemism (limited to a small geographical area) in abyssal species that were previously considered widely distributed based on traditional morphology.

“We still do not know how many species live in our world, especially marine invertebrates living in the deep sea,” said Rodríguez Flores. “The problem with this species is that the ocean is very poorly sampled, so we need to continue to explore the deep ocean collecting more specimens to have a complete picture of the distribution range and evolution of animals in the abyss before they disappear.” 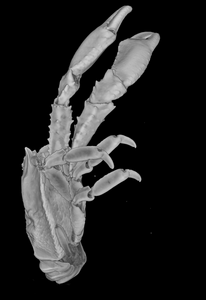 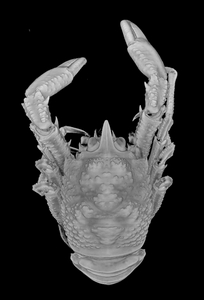