Researchers at Bournemouth University have developed and patented a new corrosion sensor that could improve safety and reliability of large structures such as bridges, aircraft, military vehicles and gas pipelines.

The device can detect defects and risks in major infrastructure at a much earlier stage than the methods that are currently used. As well as improving safety, it could reduce the need for time consuming repairs which can come at significant cost and inconvenience to industries and the public.

“Our doctors often encourage us to take health screenings regularly, so they can diagnose conditions at an early stage which gives us better options for treatment,” said Zulfiqar Khan Professor of Design Engineering and Computing at Bournemouth University who led the development.

“This sensor works on the same principal. If we can spot health risks in vehicles and mechanical structures before corrosion reaches an advanced and dangerous stage, we can avoid costly, lengthy repairs and hopefully prevent structures from being scrapped altogether.”

Whilst other corrosion sensors are used by industry – and some can even be bought on eBay – they all require cables to be plugged in to a computer. This means that maintenance must take place with a worker present at the site. Professor Khan’s device is wireless so it can be attached to a structure and its readings could be continuously monitored off-site.

As a further benefit, the sensor can be used on any kind of surface, whereas most current devices only work on metallic surfaces which the electricity from the sensor must pass through.

“The aerospace industry, for example, would prefer a sensor which can detect failures beneath non-metallic coatings. Currently this involves removing a patch of the non-conductive coating to make the conductive surface available - this could be counter-productive as it can initiate corrosion more rapidly,” explained Professor Khan.

“Unmonitored failures lead to costly consequences. Scheduled inspections are tedious, time consuming and are mostly limited to visual or surface failures. Our latest sensor technology is a futuristic, much needed solution. It can work remotely, it works on metallic and non-metallic surfaces and can detect defects several millimetres below the surface which are not visible to the naked eye,” he continued.

Professor Khan’s product is the latest development from a series of research projects which began over a decade ago at the Bovington Tank Museum in Dorset. The museum holds one of the most significant collections of tanks and military vehicles in the world. Professor Khan’s team applied their expertise to develop a means to monitor corrosion in the vehicles to help preserve their cultural heritage.

This work ultimately led to the development of a £2.5 million conservation centre for the most at-risk tanks. The team also identified maintenance work which could be carried on some tanks so they could be driven safely at showgrounds and the public could see them in action.

The team then secured funding in 2016 to work with infrastructure companies in the US where the technology enhanced their business and brought commercial benefits.

The technology has now been granted patents in the UK and the US and Professor Khan and his team are keen to work with partners so that it can be rolled out across industry and engineering and construction companies can start realising the benefits. As well as benefits for operational infrastructure, the device would help companies with large fleets of vehicles or machinery that may be kept in depots and not regularly used or serviced.

“It is a bit like coming home from work and deciding you want some food that has been at the back of the cupboard, only to find that it is past its use-by date,” he said. “Our device can continually monitor mechanical structures to ensure they always remains in date and will not have to be thrown out,” Professor Khan concluded.

Anyone interested in finding out more about the sensor and its potential applications in industry can contact Professor Khan on zkhan@bournemouth.ac.uk. 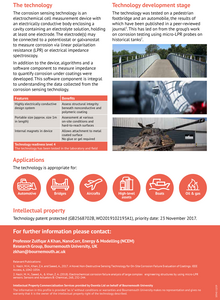