Birefringence based light modulator that works in the wavelength region of < 350 nm plays a vital role in DUV beam shaping, high density data storage, semiconductor micro-nano processing and photolithography. Actually, a series of DUV birefringent materials, including single crystals of α-BBO, MgF2, Ca(BO2)2, and α-SnF2, have thus been made and commercially used. However, these birefringent elements have the fixed birefringence, limiting their capability of continuous light modulation. Liquid crystals (LCs) are another kind of birefringent materials, of which birefringence is tunable via the molecular alignment by external electrical or magnetic stimuli. Up to now, the commonly used LCs are mainly based on organic molecules or polymers, which are not stable under DUV light due to photochemical degradation effect. Meanwhile, DUV can also induce free radicals in some organic groups, and initiate their polymerization, which disorders the alignment and the resultant birefringence of LC. Therefore, organic LC cannot modulate DUV light.

Fig. 2 summarized the desired performance of the 2D CTO LC based DUV modulator, as evidenced by its good reversibility, fast response at the millisecond level, excellent durability and DUV stability.

The magneto-birefringence effect of 2D CTO LC make it applicable to prepare flexible DUV birefringent optical hydrogel. By adding small amount of monomer and photo-initiator into 2D CTO suspension, a DUV birefringent hydrogel was prepared via UV curing during exertion of magnetic field. Once the hydrogelation is completed, the magnetically aligned 2D CTO nanosheets can be fixed inside the hydrogel and all their long axes parallel each other, even after removal of the magnetic field. The CTO hydrogel can serve as a transparent mechano-optical crystal, through which the DUV light can be in-situ modulated without direction alteration in a mechanical way (Fig. 3). Noteworthy, 2D CTO based hydrogel is the first birefringence-tunable element that can continuously tune the DUV light in a mechanical way.

This work may extend birefringence-tunable optics that are currently used in visible and infrared regions to DUV region, which is important for high density data storage, semiconductor micro-nano processing and photolithography. 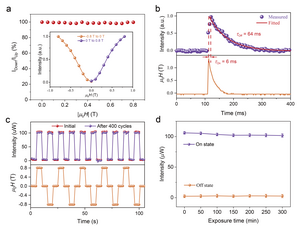 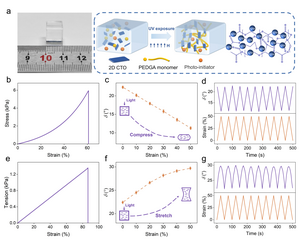