Most importantly, they unveiled the interfacial dynamics of solid-solid (between halide perovskite molecules) and solid-liquid (between a halide perovskite and an electrolyte) interfaces during photoelectrochemical hydrogen production. The latest findings open up an avenue to develop a more efficient solar-driven method for producing hydrogen fuel in the future.

Hydrogen is considered to be a better and more promising renewable energy alternative due to its abundance, high energy density, and environmental friendliness. Apart from photoelectrochemical water splitting, another promising method of producing hydrogen is by splitting hydrohalic acid using solar-driven photocatalysts. But the long-term stability of photocatalysts is a critical challenge, as most catalysts made of transition metal oxides or metal are unstable under acidic conditions.

“Lead-based hybrid perovskites are used to overcome this stability issue, but the high solubility in water and toxicity of lead limits their potential for widespread applications,” explained Dr Sam Hsu Hsien-Yi, Assistant Professor in the School of Energy and Environment and the Department of Materials Science and Engineering at CityU. “Bismuth-based perovskites, in contrast, have been confirmed to provide a non-toxic, chemically stable alternative for solar-fuel applications, but the photocatalytic efficiency needs to be enhanced.”

Motivated to design an efficient and stable photocatalyst, Dr Hsu and his collaborators recently developed a bismuth-based halide perovskite with a structure of bandgap funneling for highly efficient charge-carrier transport. It is a mixed-halide perovskite, in which the distribution of iodide ions gradually decreases from the surface to the interior, forming a bandgap funnel structure, which promotes a photo-induced charge transfer from the interior to the surface for an efficient photocatalytic redox reaction. This newly designed perovskite has high solar energy conversion efficiency, exhibiting a hydrogen generation rate enhanced up to about 341 ± 61.7µmol h−1 with a platinum co-catalyst under visible light irradiation. The findings were published half a year ago.

But Dr Hsu’s team did not stop there. “We wanted to explore the dynamic interactions between the halide perovskite molecules and those at the interface between the photoelectrode and the electrolyte, which remained unknown,” said Dr Hsu. “Since photoelectrochemical hydrogen production involves a catalytic process, highly effective hydrogen generation can be achieved by intense light absorption using a semiconductor as a photocatalyst with a suitable energy band structure and efficient charge separation, facilitated by an external electrical field formed near the semiconductor-liquid interface.”

To discover the exciton transfer dynamics, the team utilised temperature-dependent time-resolved photoluminescence to analyse the energy transportation of electron-hole pairs between the perovskite molecules. They also evaluated the diffusion coefficient and electron transfer rate constant of halide perovskite materials in the solution to illustrate the effectiveness of electron transport through the solid-liquid interfaces between a perovskite-based photoelectrode and the electrolyte. “We demonstrated how our newly designed photocatalyst can effectively achieve high-performance photoelectrochemical hydrogen generation as a result of efficient charge transfer,” said Dr Hsu.

In the experiment, the team also proved that bandgap funneling structured halide perovskites had a more efficient charge separation and transfer process between the interface of the electrode and electrolyte. The improved charge separation can drive the migration of charge carriers onto the surface of halide perovskites deposited on the conductive glasses as the photoelectrode, allowing faster photoelectrochemical activity on the photoelectrode’s surface. Consequently, the effective charge transfer inside the bandgap funnel structured halide perovskites exhibited enhanced photocurrent density under light irradiation.

“Uncovering the interfacial dynamics of these novel materials during the process of photoelectrochemical hydrogen generation is a crucial breakthrough,” explained Dr Hsu. “An in-depth understanding of the interfacial interactions between halide perovskites and liquid electrolytes can build a scientific foundation for researchers in this field to further investigate the development of alternative and useful materials for solar-induced hydrogen production.”

The findings were published in the scientific journal Advanced Materials, titled “Unravelling the interfacial dynamics of band-gap funneling in bismuth-based halide perovskites”. The research study was selected to be featured on the inside back cover of Advanced Materials. 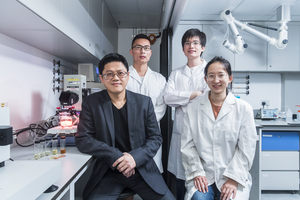