CHAMPAIGN, Ill. — While some scholars believe that a strong ethnic identity mitigates the negative mental health impact of racism for people of color, others suggest it can exacerbate these effects.

A recent study of sexual racism experienced by young sexual minority Black men in online dating communities sheds light on these differing outcomes and the circumstances in which they can occur.

In a sample of almost 700 of these men, researchers at the University of Illinois Urbana-Champaign found that having a strong or moderate commitment to their ethnic identity – defined as finding solidarity and a sense of belonging in their heritage – had protective effects, buffering feelings of depression and lower self-worth when they experienced sexual objectification by white men online, a form of racialized sexual discrimination driven by racial stereotypes such as beliefs that all Black men are physically imposing or well-endowed.

Conversely, however, a strong commitment to their ethnic identity intensified feelings of low self-worth when these men were rejected by those of their own race, the researchers found.

Published in the International Journal of Environmental Research and Public Health, the findings clarify how individuals’ emotional investment in their ethnicity can be a double-edged sword, buffering them from racism in some circumstances while exacerbating its harmful effects in others, said Ryan M. Wade, a professor of social work at the university and the first author of the study.

The men in the study were recruited primarily through ads on Facebook and Scruff, a mobile app used by gay and bisexual men to meet partners for dating or sex. Study participants’ average age was about 24, and the majority were gay (71%) or bisexual (16%).

“Same-race discrimination may be particularly bewildering and painful for young sexual minority Black men, who tend to identify strongly with their racial or ethnic heritage and value being accepted by others in their ethnic group,” Wade said.

Co-written by graduate student Matthew M. Pear, the study is believed to be the first to explore the role of ethnic identity on racialized sexual discrimination experienced by those who seek sexual or romantic partners through dating apps and online venues, Wade said.

Additionally, the study shed light on another dimension of identity development – ethnic identity exploration – that is less understood. Wade said some prior researchers suggested that greater engagement in exploring one’s ethnic identity reflects uncertainty or a lack of commitment to it and may heighten individuals’ risks of discrimination and poor psychological well-being.

“Much of the research has not disaggregated these two components of ethnic identity – commitment and exploration – making it difficult to determine whether these negative mental health effects are driven by both components or one over the other,” Wade said. “We wanted to provide clarity on that.”

Among the men in the current study, only ethnic identity commitment modified the relationship between discrimination and mental health; ethnic identity exploration had no significant effect – which may indicate it has limited bearing on mental well-being for people in general or for young sexual minority Black men in particular, the researchers said.

“Having a firm commitment to ethnic identity may encourage individuals to explore their ethnic group heritage, or the process of exploration may ultimately help individuals develop a stronger sense of commitment to their heritage,” Wade and Pear wrote.

Study participants completed surveys that measured depressive symptoms and feelings of self-worth, along with self-perceived sexual attractiveness and sensitivity to perceived rejection.

The researchers collected data on three forms of RSD – same-race rejection; beliefs that white or Eurocentric characteristics are the most desirable; and sexual objectification by white men.

The study assessed the frequency of participants’ exposure to RSD as well as their emotional reactions while browsing user profiles online – which often express preferences for potential partners of certain races – or when exchanging written communications with other users.

In general, those in the study reported moderate levels of self-worth and low-to-moderate depressive symptoms. However, all three forms of RSD were associated with poorer psychological well-being, the researchers found.

Men with high levels of ethnic identity commitment – those who felt the greatest sense of attachment to their ethnic group and took pride in it – scored lower on depressive symptoms and higher on self-worth across all the data models.

These men experienced the lowest sense of self-worth when rejected by potential partners of their own race, compared with those with moderate or low scores on ethnic identity commitment. This suggests that, for individuals with the strongest emotional ties to their ethnic group, rejection by others who share their ethnicity may be the most harmful RSD experiences, Wade said.

“When same-race rejection occurs, we should consider whether the perpetrators experience a degree of internalized racism and/or view whiteness as the hallmark of desirability,” Wade said.

“Critical consciousness programs could address RSD by analyzing popular media’s objectification of Black men or by exploring same-race discrimination as a facet of white supremacy throughout American history,” he said.

The authors declared no conflicts of interest. 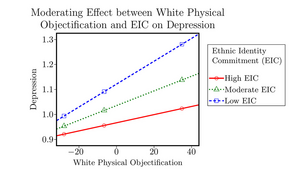