Nestled amongst a chain of islands in the southern reaches of Southeast Asia, Timor-Leste occupies the eastern half of the island of Timor, the largest of the Lesser Sunda Islands that also include Bali and Komodo, the latter of which is home to the Komodo Dragon. In May 2002, Timor-Leste (officially the Democratic Republic of Timor-Leste) became the first sovereign nation in the 21st century and is currently the 4th youngest country in the world.

Even though the country lies in the highly biodiverse region of Wallacea, its biodiversity is relatively poorly known, partly because decades of pre-independence violence and conflict have hindered biological surveys. In August 2022, a partnership between the Lee Kong Chian Natural History Museum (Singapore), Conservation International, and the Ministry of Agriculture and Fisheries of Timor-Leste conducted preliminary biological surveys across the eastern part of the island. The surveys specifically targeted remote and underexplored areas, such as the isolated mountain of Mundo Perdido (“Lost World” in Portuguese) and Nino Konis Santana National Park (NKS)—the first and largest national park in Timor-Leste.

NKS is an enormous park that covers 1,236 square kilometers of land and is mainly characterized by lowland tropical forests. In it, there are several limestone caves of archaeological importance,  and it was in one of those caves that a new gecko species was found.

While surveying the Lene Hara cave during the day, a member of the research team caught a glimpse of a lizard scurrying on the ground before disappearing into a crevice. Dr. Chan Kin Onn, a herpetologist at the Lee Kong Chian Natural History Museum and the lead author of a study published in ZooKeys, sprung into action. Soon, he found himself wedged into a tight crevice in hopes of capturing the lizard.

“I couldn’t get to the lizard because the crack was too narrow, but I saw the rear half of its body and could tell that it was a bent-toed gecko from the genus Cyrtodactylus. New species of bent-toed geckos are being discovered all across Southeast Asia and due to the remoteness of the cave, the potential for this gecko to be a new species was high,” explained Dr. Chan.

Several hours later, under the cover of darkness, the team was back in the cave, this time equipped with flashlights. “Bent-toed geckos are usually nocturnal and can be skittish during the day. Our best chance at capturing them would be at night,” says Dr. Chan.True enough, after just one hour of looking, they collected ten specimens. A few weeks later, the gecko from Lena Hara cave was confirmed to be a new species based on DNA analysis and external morphological characteristics.

The new species is named Cyrtodactylus santana, in reference to Nino Konis Santana National Park. The park’s name honors Nino Konis Santana, a freedom fighter who led the Falintil militia against the Indonesian occupation of Timor-Leste.

Even though past surveys have documented several populations of bent-toed geckos in Timor-Leste, none of them had been identified to the species level and thus, remain unnamed. Cyrtodactylus santana is the first bent-toed gecko in Timor-Leste formally described as a species.

The expedition also discovered several interesting plants and crabs that are currently being examined, all of which have the potential to be new species. “We have barely scratched the surface of Timor-Leste’s biodiversity. New discoveries can have profound impacts, because Timor-Leste is a substantial landmass bounded by deep sea trenches and is located at the fringe of the Wallacean Biodiversity Hotspot and Weber’s Line, a transitional zone between Oriental and Australasian fauna” remarked the researchers. Understanding the biodiversity of Timor-Leste could provide key insights into the divergence, evolution, and distribution of species, they believe.

Scratching the surface: a new species of Bent-toed gecko (Squamata, Gekkonidae, Cyrtodactylus) from Timor-Leste of the darmandvillei group marks the potential for future discoveries

New species from a new country: A newly desrcribed gecko from Timor-Leste, the 4th youngest country in the world 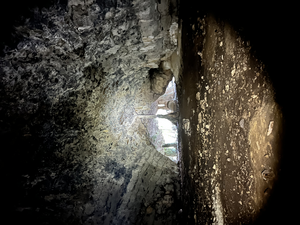 Lene Hara cave, where the new species was found