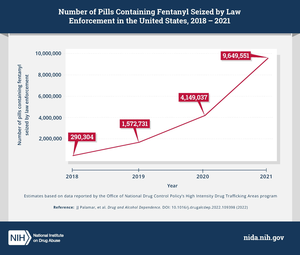 Law enforcement seizures of pills containing illicit fentanyl increased dramatically between January 2018 and December 2021, according to a new study. The number of individual pills seized by law enforcement increased nearly 50-fold from the first quarter of 2018 to the last quarter of 2021 and the proportion of pills to total seizures more than doubled, with pills representing over a quarter of illicit fentanyl seizures by the end of 2021. The study also found an increase in the number of fentanyl-containing powder seizures during this time.

Law enforcement seizures of drugs containing fentanyl—especially pills—are increasing in the United States, according to new research published in the journal Drug and Alcohol Dependence. The number of seized pills containing fentanyl has climbed dramatically: more than 2 million fentanyl-laced pills were confiscated in the last quarter of 2021, nearly 50 times the number seized in early 2018.

Receiving psychosocial and behavioral therapy alongside medications for opioid use disorder leads to better treatment engagement and continuity, according to Rutgers researchers.

BOSTON – Following a 30 percent increase in fatal overdoses from 2019 to 2020 in the United States, addiction medicine experts at the Grayken Center for Addiction at Boston Medical Center are advocating for increased distribution of naloxone, a life-saving drug that can reverse an overdose. Published in the American Journal of Public Health, researchers suggest a four-step process to expand availability of naloxone to save lives: 1. Making naloxone widely available over-the-counter, including at community locations like convenience stores and gas stations as well as pharmacies 2. Increasing funding for community-based programs focusing on harm reduction 3. Permanently eliminating insurance co-payments and prior-authorization requirements 4. Mandating co-prescribed and co-dispensed naloxone with all higher risk opioid prescriptions and medications for opioid use disorder

One promising strategy for the opioid crisis is for people treated in emergency departments for opioid overdoses to be placed on medication treatment for opioid use disorder. A new study finds that most people who fill prescriptions from emergency physicians to treat opioid use disorder do not continue to receive the medication, suggesting new approaches are needed to help people continue drug treatment begun on an emergency basis.

A large majority of individuals who reported and discussed non-suicidal self-injury on the social media platform Reddit described their experience in terms similar to those used to diagnose substance use disorder, according to researchers at the National Institutes of Health, who analyzed more than 350,000 posts and comments. People who posted on a forum dedicated to discussion of self-harm, called r/selfharm, from 2010 to 2019 often directly referred to their self-injuring activities as an “addiction,” citing cravings and escalating severity or tolerance, and regularly used terms employed by people recovering from substance use disorders, such as getting “clean” or “relapsing.” The study, published in Journal of Behavioral Addictions, was conducted by scientists at the National Institute on Drug Abuse (NIDA), part of NIH.