Human mothers grow babies in their bellies for nine months, and then after giving birth proceed to spend years raising and nurturing their children, teaching them how to perform both basic and advanced survival tasks. Fruit flies, on the other hand, lay eggs that are left to develop on their own. This makes them seem like irresponsible parents, just abandoning their young. However, a new study by the laboratory of Asifa Akhtar at the Max Planck Institute of Immunobiology and Epigenetics in Freiburg suggests that fruit fly moms in fact ensure the success of their offspring by providing them with an instruction manual for life encoded deep in their epigenomes.

From genome to epigenome

We inherit genetic information from our parents encoded in the DNA sequence. However, even though all cells in the human body contain the same DNA, they "express" different genes to fulfill different functions. DNA is wrapped around histone proteins forming a single repeating unit called the nucleosome. Many nucleosomes join together to form the "chromatin" located in the nucleus of all cells.

Epigenetic modifications such as the addition of chemical groups to histones lead to changes in chromatin organization, which can trigger either gene activation ("expression") or gene silencing. Epigenetics thereby represents an additional layer of information that helps cells to determine which genes to activate. Despite their common genome, cells in our body therefore possess different "epigenomes".

Intergenerational transmission of information from the mother

The parent's germ cells, the oocyte and the sperm, fuse to make a new organism during fertilization. It is thought that most epigenetic marks are erased between each generation. This epigenetic reset allows all genes to be read afresh for each new individual. Now, scientists from the laboratory of Asifa Akhtar discovered that one particular histone modification, the acetylation of histone H4 on the 16th lysine (H4K16ac in short) is intergenerationally maintained from the mother's oocyte to the young embryo.

„H4K16ac is an epigenetic modification that is typically associated with the activation of genes. However, we know that genes are not expressed in either the oocyte or in the first 3 hours of the embryo's life. This begs the question: what is H4K16ac doing at this early stage?" says Asifa Akhtar. To investigate the function of this histone mark in early fly development, the team performed a panel of genome-wide analyses. They found that numerous DNA regions were "marked" by H4K16ac during the early developmental stages before the onset of their gene activation.

The importance of H4K16ac for the offspring became apparent when the mother failed to transmit this mark to her children. The scientists designed experiments using genetic approaches and transgenic flies to remove the enzyme MOF from fly mothers. MOF is known to be responsible for the deposition of the H4K16ac modification.

Remarkably, when the scientists studied the offspring that were laid without the H4K16ac information, they found that genes marked by H4K16ac under normal conditions were now no longer appropriately expressed, and their chromatin organization was severely disrupted. The majority of embryos which failed to get the maternal H4K16ac instructions subsequently died from catastrophic developmental defects. „H4K16ac has an instructive function in the germline and is indispensable for embryonic development later on. It is almost like the mother leaves sticky notes with instructions on where to find the food or who to call in an emergency and so on, when the child is home alone for the first time", says Maria Samata, the first author of the study.

Lessons from flies to humans

"The fact that fly mothers ensure their offspring's success through epigenetics even before they are conceived is a fascinating result," says Asifa Akhtar. The researchers next turned to mammals and found that female mice also pass the H4K16ac histone modification to their progeny through their oocytes. This raises the intriguing possibility that humans might also use H4K16ac from the mother as a "blueprint" for successful embryonic development. Whether this is the case and what information this blueprint might encode are open questions for future investigation. 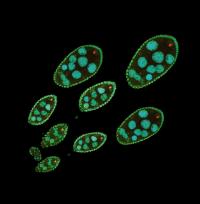