UNIVERSITY PARK, Pa. -- People who eat wildebeests, wart hogs and other wild African animals may be at risk for contracting potentially life-threatening diseases, according to an international team of researchers. The team analyzed samples of bushmeat -- meat derived from wildlife -- in the Western Serengeti in Tanzania and identified several groups of bacteria, many of which contain the species that cause diseases such as anthrax, brucellosis and Q fever.

"Many people in Sub-Saharan Africa regularly consume bushmeat, up to two-to-five times per week, which means that millions of people could be exposing themselves to these dangerous pathogens," said Robab Katani, assistant research professor of global health, Huck Institutes of the Life Sciences, Penn State. "And the number is growing. Bushmeat consumption and trade has been increasing because of growing food insecurity, low cost compared to other meat products, and perceived medicinal value, among other things."

The problem is not confined to Africa either, she added.

"Bushmeat is smuggled illegally into the U.S. and Western Europe on a daily basis," she said. "For example, Charles de Gaulle airport in France intercepts five tons per week. This practice puts even more people at risk for contracting dangerous bacterial diseases."

To quantify the risk associated with eating and handling bushmeat, the researchers first needed identify the bacteria present in the meat. They obtained 56 fresh and processed bushmeat tissue samples from the predominant large herbivores -- including buffalo, zebra and giraffe -- of the Serengeti National Park and surrounding areas. They collected these samples within three ecologically distinct regions, called Bunda, Serengeti and Tarime, within the Serengeti ecosystem. Using a broad genetic sequencing technique, called 16S rRNA sequencing, they analyzed the microbiomes -- all of the microorganisms -- present in each sample.

The team found 27 different groups -- called phyla -- of bacteria in the samples, with Firmicutes, Proteobacteria, Cyanobacteria and Bacteroidetes being the most abundant. All of these groups contain both pathogenic species. Within those phyla the researchers detected DNA signatures of bacteria within the genera Bacillus, Brucella and Coxiella, which contain the species that cause anthrax, brucellosis and Q fever, respectively. The team's findings on the microbiome analysis of the samples appear today (Dec. 2) in Scientific Reports.

"Anthrax, brucellosis and Q fever can be deadly if left untreated," said Vivek Kapur, professor of microbiology and infectious diseases, Huck Distinguished Chair in Global Health and associate director of the Huck Institutes of Life Sciences, Penn State. "Antibiotics work, but most people don't have access to them. We've encountered many people who've tragically lost a family member to these otherwise preventable diseases."

The researchers also found a particularly high prevalence of bacteria in the genus Clostridium, whose species cause diseases like botulism and tetanus. In fact, the microbiomes of wildebeest collected during the dry season comprised more than 78 percent Clostridial species.

"Understanding which bacteria are present in bushmeat is necessary to establishing a plan to help curb outbreaks of these dangerous diseases," said Kapur. "Our data suggest the presence of certain disease-causing species, and our objective now is to use species-level analyses to fine-tune our focus on specific pathogens and accurately assess and mitigate the associated risk of disease outbreaks. Ultimately, our goal is also to help build capabilities for rapid diagnosis and risk mitigation in the countries of origin to address these risks before they become a problem globally." 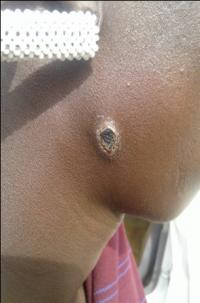