A commonly prescribed muscle relaxant may be an effective treatment for a rare but devastating form of diabetes, researchers at Washington University School of Medicine in St. Louis report.

The drug, dantrolene, prevents the destruction of insulin-producing beta cells both in animal models of Wolfram syndrome and in cell models derived from patients who have the illness.

Results are published Nov. 24 in the Proceedings of the National Academy of Sciences (PNAS) Online Early Edition.

The researchers found that elevated levels of an enzyme called calpain 2 were the main cause of death in brain cells and insulin-producing cells. Dantrolene blocks that enzyme and also prevents brain cell death in animal and cell models of the disorder.

Because the drug is approved by the Food and Drug Administration (FDA), clinical trials in Wolfram patients could get underway relatively quickly, said senior investigator Fumihiko Urano, MD, PhD, the Samuel E. Schechter Professor of Medicine.

"We'd like to test the drug first in adult patients with Wolfram syndrome, and if we get positive results, we could extend the trial to children," he said.

Dantrolene often is prescribed to people with cerebral palsy or multiple sclerosis to treat muscle spasticity. If effective in patients with Wolfram syndrome, dantrolene also may be a viable treatment for patients with more common forms of diabetes. Calpain 2, which is involved in calcium metabolism, is overactive in cell models of those more common forms of diabetes.

Wolfram syndrome affects one in 500,000 people worldwide, and many patients die by age 40.

Urano and his team of researchers also studied the effects of dantrolene on stem cells from Wolfram syndrome patients and their close relatives, such as parents or siblings. Unlike adult stem cells collected from cord blood or stem cells developed from embryos, the stem cells in these studies were grown from skin cells. The researchers treated the stem cells with growth factors so they would differentiate into specific cell types, such as neurons and insulin-producing cells.

Cells that came from Wolfram patients produced high levels of calpain 2, which induced cell death. But when the researchers treated those cells with the drug, everything changed. Levels of the enzyme dropped, and the cells stopped dying.

"We also found that dantrolene was not toxic to cells grown from the skin samples donated by patients' relatives," Urano said. "The drug interfered with cell death in cells from Wolfram patients but did not harm cells that came from parents and siblings."

The researchers are hopeful that dantrolene also may be effective against type 1 and type 2 diabetes.

"Wolfram is the most difficult form of diabetes because these patients have problems with blood sugar and so many other challenges," Urano said. "Calpain 2 also plays a role in type 1 and type 2 diabetes. Currently, we are studying the drug in animal and cell models of those types of diabetes to see if it also keeps insulin-producing cells from dying."

Having found that it also can prevent the death of brain cells and of insulin-secreting beta cells in Wolfram syndrome, Urano next wants to look more closely at how the drug affects other tissues, including the eye. Those studies will begin soon.

Muscle relaxant may be viable treatment for rare form of diabetes 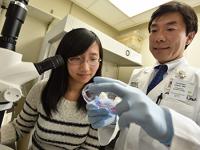 A Treatment Target for Wolfram Syndrome