The aim of this new measurement method is to estimate the distribution of aquatic animals using droplet digital polymerase chain reaction (ddPCR) in order to quantify the number of target DNA copies present. This method focuses on quantification accuracy for low environmental DNA (eDNA) concentrations, because the eDNA recovered for target species from field samples typically occur in very low concentrations. This technique can be applied for habitat research on rare or non-native species in the field.

Evaluations of species distribution and biomass are fundamental in studies on the population dynamics and community structure of an ecosystem. Recently, the eDNA method was developed to identify organisms in various aquatic ecosystems, such as lakes/ponds, rivers, and oceans. However, no quantitative eDNA technique has been fully established, because there are methodological limitations to quantifying eDNA concentrations.

Dr. Hideyuki Doi from the Institute for Sustainable Sciences and Development at Hiroshima University compared the methodological advantages of ddPCR over those of conventional qPCR for eDNA quantification. Dr. Doi and his colleagues at Ryukoku University and Kobe University used eDNA from mesocosm experiments with different numbers of common carp to evaluate the quantification accuracy of qPCR and ddPCR when estimating species abundance and biomass.

Dr. Doi and his colleagues found that ddPCR quantified the concentration of carp eDNA relative to carp abundance and biomass more accurately than qPCR, especially at low eDNA concentrations. In addition, errors in the analysis were relatively lower with ddPCR than with qPCR.

"We showed that the relationship between carp abundance and eDNA concentration was higher than that between biomass and eDNA using both ddPCR and qPCR. Therefore, ddPCR can be used to quantify eDNA concentration in water. However, ddPCR is currently more expensive and time consuming compared to qPCR and in natural habitats, eDNA estimation for organism abundance is more complex. Therefore, by using multiple technologies, we can develop better eDNA methods to evaluate the distribution and abundance/biomass of species and communities" said Dr. Doi.

The article "Use of Droplet Digital PCR for Estimation of Fish Abundance and Biomass in Environmental DNA Surveys" by Hideyuki Doi, Kimiko Uchii, Teruhiko Takahara, Saeko Matsuhashi, Hiroki Yamanaka, and Toshifumi Minamoto was published in PLOS ONE online on March 23, 2015.

How many organisms do live in this aquatic habitat?

Journal
PLoS ONE
Funder
Japan Ministry of the Environment, 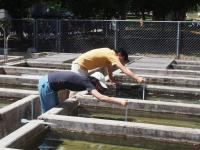