A research team from IBM and the Georgia Institute of Technology has demonstrated the first silicon-germanium transistor able to operate at frequencies above 500 GHz. Though the record performance was attained at extremely cold temperatures, the results suggest that the upper bound for performance in silicon-germanium devices may be higher than originally expected.

"For the first time, Georgia Tech and IBM have demonstrated that speeds of half a trillion cycles per second can be achieved in a commercial silicon-based technology, using large wafers and silicon-compatible low-cost manufacturing techniques," said John D. Cressler, Byers Professor in Georgia Tech's School of Electrical and Computer Engineering, and a researcher in the Georgia Electronic Design Center (GEDC) at Georgia Tech. "This work redefines the upper bounds of what is possible using silicon-germanium nanotechnology techniques."

The accomplishment will be reported in the July issue of the journal IEEE Electron Device Letters. The research has been supported by IBM, NASA, and the GEDC at Georgia Tech.

"This groundbreaking collaborative research by Georgia Tech and IBM redefines the performance limits of silicon-based semiconductors," said Bernie Meyerson, vice president and chief technologist at the IBM Systems and Technology Group. "IBM is committed to working closely with our academic and industry partners to deliver the insight and innovation that will enable a new generation of high-performance, energy efficient microprocessors."

The silicon-germanium heterojunction bipolar transistors built by the IBM-Georgia Tech team operated at frequencies above 500 GHz at 4.5 Kelvins – a temperature attained using liquid helium cooling. At room temperature, these devices operated at approximately 350 Ghz. Performance measurements were made using a specialized high-frequency test system in the Georgia Electronic Design Center.

The devices used in the research are from a prototype fourth-generation SiGe technology fabricated at IBM on a 200-millimeter wafer using an older un-optimized mask set. Simulations suggest that the technology could ultimately support much higher (near-Terahertz) operational frequencies at room temperature, Cressler said.

"Having a silicon-based technology that is compatible with low-cost IC manufacturing – while still providing these extreme levels of performance – allows us to envision integrating these devices into systems that would be affordable for emerging commercial markets as well as defense applications," Cressler said.

The next step in this research will be to understand the physics behind the silicon-germanium devices, which display some unusual properties at these extremely low temperatures.

"We observe effects in these devices at cryogenic temperatures which potentially make them faster than simple theory would suggest, and may allow us to ultimately make the devices even faster," said Cressler, who heads the world's largest university-based silicon-germanium research team at Georgia Tech. "Understanding the basic physics of these advanced transistors arms us with knowledge that could make the next generation of silicon-based integrated circuits even better."

SiGe is a process technology in which the electrical properties of silicon, the material underlying virtually all modern microchips, is augmented with germanium to make chips operate more efficiently. SiGe boosts performance and reduces power consumption in chips that go into cellular phones and other advanced communication devices.

Silicon-germanium technology has been of great interest to the electronics industry because it allows substantial transistor performance improvements to be achieved while using fabrication techniques compatible with standard high-volume silicon-based manufacturing processes. By introducing germanium into silicon wafers at the atomic scale, engineers can boost performance while retaining the many advantages of silicon.

IBM first announced its SiGe technology in 1989, and later introduced SiGe into the industry's first standard, high-volume SiGe chips in October 1998. Since that time, the company has shipped hundreds of millions of SiGe chips.

A laboratory and specialized test equipment used in the research are located in the Georgia Electronic Design Center (GEDC) at Georgia Tech.

"We are happy to see that the GEDC's continuing support of research in high-speed mixed-signal technologies and other device research is leading to more cost-effective solutions for commercial applications," said Joy Laskar, who is director of the GEDC and also the Joseph M. Pettit Professor Chair in Electronics in Georgia Tech's School of Electrical and Computer Engineering.

"This new speed record provides encouragement to keep pushing forward on silicon-germanium devices," Cressler said. "There is a lot more fruit available from silicon-germanium technology if we invest the effort to get there." 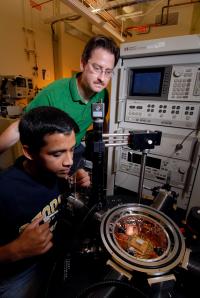 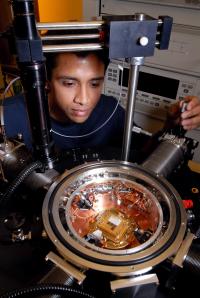