The discovery of a "maternal age effect" by a team of Penn State scientists that could be used to predict the accumulation of mitochondrial DNA mutations in maternal egg cells -- and the transmission of these mutations to children -- could provide valuable insights for genetic counseling. These mutations cause more than 200 diseases and contribute to others such as diabetes, cancer, Parkinson's disease, and Alzheimer's disease. The study found greater rates of the mitochondrial DNA variants in children born to older mothers, as well as in the mothers themselves. The research will be published in the early online edition of the Proceedings of the National Academy of Sciences on October 13, 2014,

Mitochondria are structures within cells that produce energy and that contain their own DNA. "Many mitochondrial diseases affect more than one system in the human body," said Kateryna Makova, professor of biology and one of the study's primary investigators. "They affect organs that require a lot of energy, including the heart, skeletal muscle, and brain. They are devastating diseases and there is no cure, so our findings about their transmission are very important."

The multidisciplinary research team set out to learn whether maternal age is important in the accumulation of mitochondrial DNA (mtDNA) mutations, both in the mother and in the child as a result of transmission. Collaborating with Ian Paul, a pediatrician at the Penn State Milton S. Hershey Medical Center, they took samples of blood and of cells inside the cheek from 39 healthy mother-child pairs. Because mtDNA is inherited only maternally, paternal mtDNA was not a factor in the study. Studying healthy individuals gave the researchers a baseline for future studies of disease-causing mutations.

Through DNA sequencing, they found more mutations in blood and cheek cells in the older mothers in the study. Maternal age of study participants ranged from 25 to 59. "This finding is not surprising," Makova said, "because as we age, cells keep dividing, and therefore we will have more mutant genes." But finding greater rates of mutations in children born to the older mothers did come as a surprise. The researchers believe a similar mutation process is occurring both in the cells of the mothers' bodies and in their germ lines.

The study led to another important discovery about egg-cell development. Although it was known that developing egg cells go through a "bottleneck" period that decreases the number of mtDNA molecules, scientists didn't know how small or large this bottleneck is. "If the bottleneck is large, the genetic makeup of the mother's mitochondria will be passed to her children," Makova explained. "However, if it is tiny -- if there is a severe decrease in mitochondrial molecules during the egg-cell development -- then the genetic makeup of the child might differ dramatically from that of the mother. What we discovered is that this bottleneck is indeed very small."

This finding is especially important for mothers who have a mitochondrial disease. For many mitochondrial diseases, 70 to 80 percent of molecules need to have the disease-causing variant for the disease to manifest itself. But for others, only 10 percent of the mtDNA molecules with the variant are needed to cause disease. "If the bottleneck is very small, as we've found in our study, these percentages can change dramatically," Makova said. "Knowing the size of the bottleneck allows us to predict, within a range, the percentage of disease-carrying molecules that will be passed on to the child."

Knowledge about both the maternal age effect and the bottleneck size is useful in family planning. "We have some predictive power now and can assist genetic counselors in advising couples about the chances of mitochondrial diseases being passed to the next generation," Makova said. "Everyone is concerned about Down syndrome because that is a common genetic problem. We have now added another set of genetic disorders that also might be affected by the age of the mother. It is good for couples to have this knowledge as they make family-planning decisions."

High-resolution images are online at http://science.psu.edu/news-and-events/2014-news/Makova10-2014 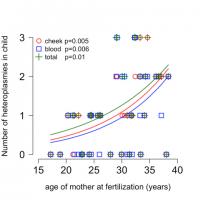