A research team consisting of Ryota Kondo (Ph.D. candidate), Yamato Tani (Graduate student), and Professor Michiteru Kitazaki from Toyohashi University of Technology, Associate Professor Maki Sugimoto and Professor Kouta Minamizawa from Keio University, and Professor Masahiko Inami from The University of Tokyo has revealed that a re-association of the right thumb with the virtual left arm can be induced by visuo-motor synchronization in a virtual environment; however, this re-association may be weaker than the natural association. This study contributes to the expanding perspectives on body schemes of augmented humans and understanding their limitations. Body-part re-association can be applied to developing functional prosthesis and embodied tools in future. This research was published in the open access journal Frontiers in Robotics and AI in 19th March 2020.

Illusory body ownership can be induced by visuo-motor synchrony; It appears as if a virtual body is one's own body if the virtual body moves synchronously with one's movements. It is possible to have illusory body ownership to various bodies with different appearances, including a transparent body (Kondo, et al., Scientific Reports, 2018). However, in most studies, virtual body parts were associated with the corresponding actual body parts. For example, the virtual left arm was synchronously moved with the actual left arm.

The research team focused on the difference in correspondence between the actual and virtual body parts. In 2017, Sasaki, Inami et al. (SIGGRAPH 2017) created two additional robot arms by controlling them with left and right foot movements ('MetaLimbs'). However, the sense of ownership to the robotic arms has not been investigated in detail. The team aimed to investigate whether the illusory body ownership can be induced by body-part re-association at different levels of the human body hierarchy: a virtual left arm and the actual right thumb.

Twenty participants moved the right thumb voluntarily when they observed a virtual left arm through a head-mounted display for 5 minutes. The virtual left arm was moved either synchronized or asynchronized with the right thumb. It was found that participants felt as if their right thumb had become the left arm and the virtual left arm was a part of their own body in the synchronous condition. However, the sense of ownership was not very strong, suggesting that the re-association of different body parts may be weaker than the natural association. This may be because the re-association was performed for only 5 minutes in the experiment.

This study contributes to expanding perspectives on human body or body scheme and offers the means to investigate potentials and limitations of augmented humans. The body-part re-association may be applied to developing functional prosthesis and embodied tools in future. 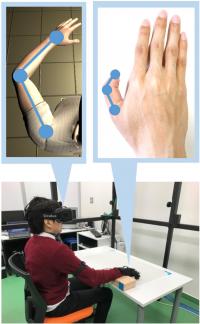 Image on the HMD (left) and a participant (right)