Charismatic clownfish, the coral reef fish made famous by the film Finding Nemo, are instantly recognizable by their white stripes. These stripes, which scientists call bars, appear as clownfish mature from larvae into adults in a process called metamorphosis, but how these distinctive patterns form has long remained a mystery.

Now, a new study has found that the speed at which these white bars form depends on the species of sea anemone in which the clownfish live. The scientists also discovered that thyroid hormones, which play a key role in metamorphosis, drive how quickly their stripes appear, through changes in the activity of a gene called duox.

"Metamorphosis is an important process for clownfish - it changes their appearance and also the environment they live in, as clownfish larvae leave life in the open ocean and settle in the reef," said senior author Professor Vincent Laudet, who leads the Marine Eco-Evo-Devo Unit at the Okinawa Institute of Science and Technology Graduate university (OIST). "Understanding how metamorphosis changes depending on the sea anemone host can help us answer questions not only about how they adapt to these different environments, but also how they might be affected by other environmental pressures, like climate change."

In the study, published 24th May, 2021 in PNAS, a team of researchers from the Centre for Island Research and Environmental Observatory (CRIOBE) in France first surveyed the clownfish species, Amphiprion percula, in Kimbe bay, Papua New Guinea.

The clownfish there can live either in the magnificent sea anemone, Heteractis magnifica, or the more toxic giant carpet anemone, Stichodactyla gigantea.

During the survey, the team noticed that juvenile clownfish that lived in the giant carpet anemone gained their adult white bars faster than clownfish living in the magnificent sea anemone.

"We were really interested in understanding not only why bar formation occurs faster or slower depending on the sea anemone, but also what drives these differences," said first author Dr. Pauline Salis, a postdoctoral researcher at the Observatoire Océanologique de Banyuls-sur-Mer, Sorbonne Université Paris, who studies color patterning in coral reef fish.

In the lab, the team worked with the clownfish, Amphiprion ocellaris, a close relative of Amphiprion percula. They focused on thyroid hormones, which are known to trigger metamorphosis in frogs.

Next, the scientists tested whether these observations held true the field. When the CRIOBE lab returned to Kimbe Bay, they transported juvenile clownfish from both species of sea anemone back to Dr. Salis in France.

To gain insight into what caused these higher levels of thyroid hormones, the team measured the activity of most genes in the clownfish genome.

"The big surprise was that out of all these genes, only 36 genes differed between the clownfish from the two sea anemone species," said Prof. Laudet. "And one of these 36 genes, called duox, gave us a real eureka moment."

Duox, which makes the protein dual oxidase, plays an important role in the formation of thyroid hormones, previous research has shown. The duox gene showed higher levels of activity in clownfish from the giant carpet anemone, compared to clownfish from the magnificent sea anemone.

Taken together, the data suggests that increased activity of duox in clownfish living in the giant carpet anemone result in higher levels of thyroid hormones, and thus the faster rate of white bar formation as iridophore pigment cells develop quicker.

However, the research raises still more questions for the scientists to answer, including the ecological reason for this variation in the rate of white bar formation.

It may be because the giant carpet anemone is more toxic, with thyroid hormone levels increasing as a response to stress, the researchers speculated.

"Here at OIST, we're starting to delve into some possible explanations," said Prof. Laudet. "We suspect that these changes in white bar formation are just the tip of the iceberg, and that many other differences are present that help the clownfish adapt to the two different sea anemone hosts."

How do clownfish earn their stripes? 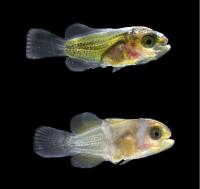