The National Science Foundation has awarded $1.65 million to a project led by Washington University in St. Louis physicist Ken Kelton to build an electrostatic levitation chamber that will be installed at the Spallation Neutron Source in Oakridge National Laboratory.

Using neutrons as a probe, the instrument will allow scientists to watch atoms in a suspended drop of liquid as the drop cools and solidifies.

Kelton, PhD, the Arthur Holly Compton Professor in Arts & Sciences and chair of physics at Washington University, has many plans for the new instrument, but is particularly eager to see what it can tell him about a phase transition called the glass transition.

Glasses are formed when a liquid changes smoothly from a freely flowing liquid to a viscous liquid and finally to a rigid structure.

All liquids can form glasses, but some, such as liquid metals, will form a glass only when they are cooled very quickly. Liquid silica, on the other hand, will form glass even when it is cooled slowly. Glassmakers exploit this slow transition to form silicate glass into intricate objects, such as vases and wine glasses.

Even though glasses have been known and used for centuries (the earliest record of glass production — on clay tablets discovered in Mesopotamia — is nearly 4000 years old), scientists still don't fully understand the physics underlying glass formation.

In fact, Nobel laureate Philip Anderson has called the glass transition "the deepest and most interesting unsolved problem in solid-state research."

Kelton and his graduate student, Nick Mauro, designed and built the WU-BESEL in consultation with Jan Rogers, PhD, of NASA's Marshall Space Flight Center in Huntsville, Ala.; Dieter Herlach, PhD, of the German Aerospace Center in Cologne, Germany; and Alan Goldman, PhD, of Iowa State University.

The WU-BESL uses the bright X-ray beam produced by the Advanced Photon Source, a particle accelerator designed to produce an intense beam of radiation, to probe the structure (or arrangement of atoms) in suspended liquids.

When it is not at Argonne, the WU-BESL inhabits a small room in the basement of Compton Hall at Washington University, where it is used for materials research that does not require X-rays.

During a WU-BESL experiment, electrodes above and below the sample charge the sample's surface by induction and it rises in the evacuated chamber, hoisted by electrostatic attraction.

The hovering sample is held steady by the vertical electrodes, two sets of electrodes in the horizontal plane and a computer-controlled feedback system.

Once levitated, the sample is melted with a high-powered laser and allowed to cool. Because nothing is touching the molten drop, it can cool well below its freezing point before it crystallizes.

"The German physicist Gabriel D. Fahrenheit was the first to notice that it was possible to cool water well below its freezing point without it turning into ice," Kelton says. In fact, pure water, which normally freezes at 32 degrees Fahrenheit, can be supercooled at standard pressure down to almost -43.6 degrees Fahrenheit.

A supercooled liquid is not at equilibrium, and, as Fahrenheit found out, almost any disturbance will drive it over the energy barrier to its crystalline equilibrium phase. Try tapping a beer that has been stored in the freezer on the side of a table; it will crystallize instantly.

Glassy water and other interesting things

The really nifty bit is that if water can be cooled to really low temperatures without triggering crystallization, it will turn into a glass. The glass transition temperature for water is hard to determine, but studies suggest it is about -162.4 degrees Fahrenheit.

Kelton and his colleagues, Alan Goldman, PhD, of Iowa State University, Takeshi Egami, PhD, of the University of Tennessee and Xun-Li Wang, PhD, of the Spallation Neutron Source are interested not in glassy water but in equally strange materials called metallic glasses.

Like other solids, most metals are crystalline. It wasn't until 1960 that scientists succeeded in making a metallic glass and even then the sample had to be cooled really fast (at about 100,000 Kelvin per second) to avoid crystallization.

In the 1990s, however, metallic glasses were discovered that could be cooled at rates comparable to the silicate glasses (window glass). The basic trick was to add metal atoms of various sizes to the melt that got in the way of the atoms rearranging themselves to form crystals. This "confused" the liquid, preventing it from forming the crystal phases that would otherwise have formed.

Like traditional glasses, metallic glasses can be blown into intricate shapes. But what intrigues the physicists is what these novel materials might reveal about the glass transition itself.

To study the glass transition, the scientists want be able to see how the atoms in the molten metal are moving as the metal vitrifies. And to do this they need an unusual "microscope," one that uses neutrons instead of light.

The NESL will be designed to slot into instrument bays at the Spallation Neutron Source at the Oak Ridge National Laboratory, the "most intense pulsed neutron source on earth," says Kelton.

At the laboratory, a linear accelerator will spit out pulses of protons that will strike a "target station" containing 20 tons of liquid mercury, an element that has many neutrons per atom.

When the protons hit the heavy nuclei of the mercury atoms, some neutrons will be "spalled," or knocked out of the nuclei, and others will be boiled off as the bombarded nuclei heat up. For every proton striking a target nucleus, 20 or 30 neutrons will be expelled. The pulses of neutrons will be directed at the experiment bay where the levitation chamber is installed.

The neutrons will have wavelengths similar to the distances between the atoms in the sample. Because of this match, they will be diffracted by the sample, just as an ocean wave is diffracted as it passes through the serried piers of a boardwalk. The intensity pattern around the sample thus will contain information about the structure of the sample.

X-ray diffraction works in much the same way and provides some of the same information, but Kelton is keen to switch to neutrons because they provide valuable additional information. Neutrons exchange energy with the atoms in the sample (a process called inelastic scattering) more readily than do X-rays, and when they do this, the intensity pattern contains information not just about the atoms' locations but also about their movement.

In a sense, instead of the snapshot of a sample, the NESL will provide a movie.

Neutrons, Kelton says, will allow us to "measure the motion of the atoms — not just where they are but how they're moving around," and motion, or the lack of it, is the key to the glass transition.

At the atomic level, glasses resemble liquids. If you look at the positions of the atoms in a glass and in a liquid, you can't tell the difference between them. (The arrangement of atoms in a crystal, on the other hand, doesn't look anything like that in a liquid.) So if a glass and a liquid look the same, why is a glass a glass and not a liquid?

The answer seems to be that the atoms in a glass are locked in place by surrounding atoms and can't move very far unless all the other atoms move as well. As a glass-forming liquid cools, the liquid flows more and more slowly until all motion stops. This locking is roughly analogous to what happens when you try to solve a 15 puzzle (below), and get some of the numbers in order, stranding a tile you need in the wrong quadrant.

The experiments with the WU-BESL revealed one fascinating mechanism by which some metallic alloys stave off crystallization on the way to becoming glasses. As the liquid alloys cool, islands form within them where the atoms are in what is called icosahedral order. In other words, the atoms are in positions that correspond to the vertices of the 20-sided solid called an icosahedron.

What makes this interesting is that this kind of arrangement is forbidden in crystals. So, as long as the atoms hang together in icosahedral order, the liquid is "frustrated" and cannot solidify. In some metallic glasses, Kelton and his group have shown that icosahedral order increases as the liquid becomes a glass. While icosahedral order is not found in all glasses, particularly not the silicate ones, Kelton thinks similar geometrical frustration likely underlies the glass transition in these as well.

"The two camps have locked horns," says Kelton, and the exciting thing about the NESL is that it has the potential to settle the fight one way or the other. 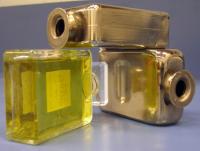