A switch from annual to multiyear colonies and a willingness to feed just about any prey to their young have allowed invasive yellowjacket wasps to disrupt native populations of insects and spiders on two Hawaiian islands, a new study has found.

By analyzing the DNA from bits of prey snatched from foragers returning to nests, ecologists from the University of California, San Diego, found that introduced yellowjacket wasps kill or scavenge prey from 14 different taxonomic orders of animals, even reptiles and birds.

"They're consuming anything from geckos to shearwater to tree lice to more juicy items that you would expect them to eat, like caterpillars. They're just like little vacuum cleaners," said Erin Wilson, who recently completed her doctorate at UC San Diego and is the lead author of the study reported in the Proceedings of the National Academy of Sciences this week.

Wilson and her colleagues found that nearby populations of caterpillars and spiders rebounded when rangers removed wasp nests.

Existing traits, like a flexible diet, can explain why some transplanted species become invasive, but the way a new environment might alter the invader's behavior is seldom considered, the authors say.

In their native range, Western yellowjackets (Vespula pensylvanica) nearly always form nests in the spring that become dormant before winter. In Hawaii's mild climate, however, up to 20 percent of colonies persist for years, grow to enormous sizes and have become major pests. One colony on Maui had as many as 600,000 individuals, compared to the usual size of a few thousand wasps.

"Rather than having a nest the size of a football, you'll have a nest the size of a '57 Buick," Wilson said. "Our largest colony had four nest entrances that were just like fire hoses of wasps coming in and out." More than three times as many foragers return to perennial nests each minute compared to annual nests, the researchers found, most of them bringing food.

The sheer numbers are changing the ecology of Hawaii's endangered ohia woodlands and subalpine shrublands.

"It's not just what they're killing," Wilson said. "They're also collecting great amounts of nectar, drawing down the resources for anything else that might want to feed on it whether it's native insects or birds like the Hawaiian honeycreepers."

Adult wasps mostly consume nectar, but collect protein-rich food for their developing larvae and carry it back to the nest. Wilson and her field assistants plucked bits of food from the mandibles of 500 foragers returning to 10 different nests, five in each park, then sequenced the DNA.

"We were able to identify, using genetics, very small prey items," Wilson said. They compared the sequences to a public database and to sequences they obtained from whole, identifiable specimens collected near the nests to create a comprehensive catalogue of the wasps' diet.

Although wasps will scavenge food from carcasses, more than two-thirds of the confiscated food bits were from freshly killed prey, they found, including native spiders, flies, crickets, bark lice, and Hylaeus bees.

The wasps also eat other introduced insects, which are abundant in Hawaii, such as European honeybees. These fellow invaders may help to sustain larger populations of wasps than the native fauna could, the authors say.

"We were not only seeing what the yellowjackets consumed, we were actually able to tie that directly to predation," Wilson said. "We were able to say these things in the diet are actually being depressed at the population level." 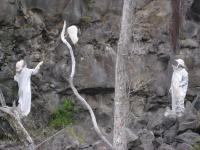 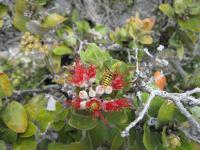