Laboratory cell experiments and computer simulations have revealed molecular mechanisms regulating a protein channel responsible for transporting chloride and other charged molecules across cell membranes. The findings were published in the Proceedings of the National Academy of Sciences (PNAS).

"Our findings could help provide clues for developing treatments for diseases associated with this channel's malfunction, including some cancers, cystic fibrosis, and neurological pain," says molecular neurophysiologist Byung-Chang Suh of Daegu Gyeongbuk Institute of Science and Technology (DGIST), who led the study.

Transmembrane 16A (TMEM16A) is a chloride channel found in cell membranes. It is involved in diverse physiological roles, including small muscle contraction, regulating nerve excitability and cell volume, and detecting 'bad' heat by sensory nerve fibres. Scientists already know quite a lot about this protein. Now, Suh and his colleagues in Korea and the US have revealed some of the molecular underpinnings of its interaction with a cellular signalling phospholipid called PIP2.

PIP2 is found in the inner leaflet of the cell's membrane. PIP2 binding to TMEM16A regulates the amount of chloride, and thus the electric current, that passes through it.

The team found that PIP2 acts differently on two variations of the TMEM16A channel. Human cell experiments showed that PIP2 depletion reduced the current passing through the version called TMEM16A(ac) but not through TMEM16A(a). They also found that the energy-carrying molecule called ATP was needed for current to run through both types of the channel.

Structural analyses and computer simulations showed that phosphorylation - or adding a phosphate group¬ - of a specific amino acid on TMEM16A changed how PIP2 bound to that part of the chloride channel, with different effects on TMEM16A(ac) and TMEM16A(a).

"Our investigations provide an important foundation for mechanistic understanding of TMEM16A activity, suggesting its function depends on the channel variant, and is regulated by PIP2 binding and channel phosphorylation," says Suh. The scientists hope their investigations will assist other studies of similar cell membrane proteins, in addition to supporting drug development research.

They recommend further studies to understand how the structures of TMEM16A variants impact its physiological functions in various tissues. 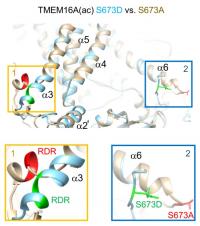