After using optical tweezers to squeeze a tiny bead attached to the outside of a human stem cell, researchers now know how mechanical forces can trigger a key signaling pathway in the cells.

The squeeze helps to release calcium ions stored inside the cells and opens up channels in the cell membrane that allow the ions to flow into the cells, according to the study led by University of California, San Diego bioengineer Yingxiao Wang.

Researchers have known that mechanical forces exerted on stem cells have a significant role to play in how the cells produce all kinds of tissues--from bone to blood--from scratch. But until now, it hasn't been clear how some of these forces translate into the signals that prod the stem cells into building new tissue.

The findings published in the journal eLife could help scientists learn more about "the functional mechanisms behind stem cell differentiation," said Wang, an associate professor of bioengineering. They may also guide researchers as they try to recreate these mechanisms in the lab, to coax stem cells into developing into tissues that could be used in transplants and other therapies.

"The mechanical environment around a stem cell helps govern a stem cell's fate," Wang explained. "Cells surrounded in stiff tissue such as the jaw, for example, have higher amounts of tension applied to them, and they can promote the production of harder tissues such as bone."

Stem cells living in tissue environments with less stiffness and tension, on the other hand, may produce softer material such as fat tissue.

Wang and his colleagues wanted to learn more about how these environmental forces are translated into the signals that stem cells use to differentiate into more specialized cells and tissues. In their experiment, they applied force to human mesenchymal stem cells--the type of stem cells found in bone marrow that transform into bone, cartilage and fat.

The engineers used a highly focused laser beam to trap and manipulate a tiny bead attached to the cell membrane of a stem cell, creating an optical "tweezers" to apply force to the bead. The squeeze applied by the tweezers was extremely small--on the order of about 200 piconewtons. (Forces are measured in a unit called newtons; one newton is about the weight of an apple held to the Earth by gravity, and one piconewton is equivalent to one-trillionth of a newton.)

When there were no calcium ions circulating outside the cell, this force helped to release calcium ions from a structure inside the cell called the endoplasmic reticulum. The release is aided by the cell's inner structural proteins called the cytoskeleton, along with contracting protein machinery called actomyosin. When the force triggered the movement of calcium ions into the cell from its extracellular environment, only the cytoskeleton was involved, the researchers noted.

Calcium ions help deliver a number of important cell signals, said Wang. "They often trigger a molecular cascade inside cells, and can send signals to the cell nucleus that can turn on or off gene expression."

This type of signaling may be one link between the mechanical forces acting on a stem cell and its transformation into other cell types, said Wang. His research team plans to study the impact of mechanical force on other signaling pathways in a variety of cell types, to learn more about how they could regulate cell fate.

The publication is "Distinct mechanisms regulating mechanical force-induced Ca2+ 1 signals at the plasma membrane and the endoplasmic reticulum in human mesenchymal stem cells," published Feb. 10 2015 in the journal eLife. 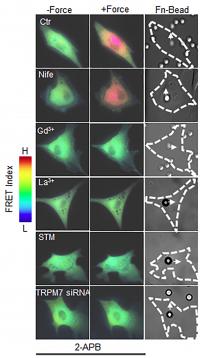 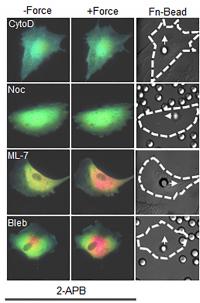