Have you ever wondered why just seeing food can make your mouth start to water? By visualizing neuronal activity in specific areas of the zebrafish brain, scientists at the National Institute of Genetics (NIG) in Japan have revealed a direct link between visual perception of food and feeding motivation. The study, published in the April 20, 2017 issue of Nature Communications, suggests that "eating with the eyes" is deeply rooted in evolution.

"In vertebrate animals, feeding behavior is regulated by a brain area called the hypothalamus. The hypothalamic feeding center integrates information about bodily energy requirements and environmental food availability. Zebrafish, like humans, mostly use vision for recognition of food or prey. It was not known how the hypothalamus receives visual information about prey. We first demonstrated that neurons in the hypothalamus do indeed respond to the sight of prey. Then we looked for neurons in the visual system that responded to prey and discovered 'prey detector' neurons in an area called the pretectum. Furthermore, we found a direct neural link connecting the prey detector neurons to the hypothalamic feeding center", Dr. Muto, the leading author of the study, explained.

The key to this discovery has been recent progress in the development and improvement of the highly sensitive, genetically encoded calcium indicator GCaMP, which can be used to monitor neuronal activity in the form of calcium signals. Another important technology is the ability to control the specific neurons in which GCaMP is expressed. This was critical for recording distinct calcium signals from identifiable neurons.

Prof. Kawakami, the senior author, showed us his zebrafish facility where thousands of fish tanks can be seen, each of which contains genetically different fish that can turn on, or drive the GCaMP expression in different types of cells in the brain or in the body. This collection of driver fish lines is being used to study various tissues and cell types by zebrafish researchers all over the world. Of the nearly 2,000 such driver fish lines in the lab, two played important roles in the current study: one for the imaging of the prey detector neurons, and the other for the feeding center in the hypothalamus.

"Our study demonstrates how tightly visual perception of food is linked to motivational feeding behavior in vertebrate animals. This is an important step toward understanding how feeding is regulated and can be modulated in normal conditions as well as in feeding disorders", Dr. Muto said.

'Eating with the eyes' is hard-wired in the brain 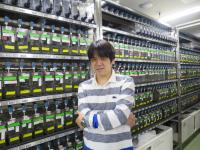 Neuronal Activity in the Feeding Center