Scientists have successfully regenerated cells in the retina of adult mice at the University of Washington School of Medicine in Seattle.

Their results raise the hope that someday it may be possible to repair retinas damaged by trauma, glaucoma and other eye diseases. Their efforts are part of the UW Medicine Institute for Stem Cell and Regenerative Medicine.

Please see a news video about the findings.

Many tissues of our bodies, such as our skin, can heal because they contain stem cells that can divide and differentiate into the type of cells needed to repair damaged tissue. The cells of our retinas, however, lack this ability to regenerate. As a consequence, injury to the retina often leads to permanent vision loss.

This is not the case, however, in zebrafish, which have a remarkable ability to regenerate damaged tissue, including neural tissue like the retina. This is possible because the zebrafish retina contains cells called Müller glia that harbor a gene that allows them to regenerate. When these cells sense that the retina has been injured, they turn on this gene, called Ascl1.

The gene codes for a type of protein called a transcription factor. It can affect the activity of many other genes and, therefore, have a major effect on cell function. In the case of the zebrafish, activation of Ascl1 essentially reprograms the glia into stem cells that can change to become all the cell types needed to repair the retina and restore sight.

The team of researchers in the new study were led by Tom Reh, University of Washington School of Medicine professor of biological structure. The scientists wanted see whether it was possible to use this gene to reprogram Müller glia in adult mice. The researchers hoped to prompt a regeneration that doesn't happen naturally in mammal's retina.

Their research findings appear online July 26 in the journal Nature. The lead author is Nikolas Jorstad, a doctoral student in the Molecular Medicine and Mechanisms of Disease program at the University of Washington.

Like humans, mice cannot repair their retinas. Jorstad said that to conduct their experiment, the team "took a page from the zebrafish playbook." They created a mouse that had a version of the Ascl1 gene in its Müller glia. The gene was then turned on with an injection of the drug tamoxifen.

Earlier studies by the team had shown that when they activated the gene, the Müller glia would differentiated into retinal cells known as interneurons after an injury to the retina of these mice. These cells play a vital role in sight. They receive and process signals from the retina's light-detecting cells, the rods and the cones, and transmit them to another set of cells that, in turn, transfer the information to the brain.

In their earlier research, however, the researchers found that activating the gene worked only during the first two weeks after birth. Any later, and the mice could no longer repair their retinas. Reh said that at first they thought another transcription factor was involved. Eventually they determined that genes critical to the Müller glia regeneration were being blocked by molecules that bind to chromosomes. This is one way cells "lock up" genes to keep them from being activated. It is a form of epigenetic regulation -- the control of how and when parts of the genome operate.

In their new paper, Reh and his colleagues show that, by using a drug that blocks epigenetic regulation called a histone deacetylase inhibitor, activation of Ascl1 allows the Müller glia in adult mice to differentiate into functioning interneurons. The researchers demonstrated that these new interneurons integrate into the existing retina, establish connections with other retinal cells, and react normally to signals from the light-detecting retinal cells.

Reh said his team hopes to find out if there are other factors that can be activated to allow the Müller glia to regenerate into all the different cell types of the retina. If so, it might be possible, he said, to develop treatments that can repair retinal damage, which is responsible for several common causes of vision loss. 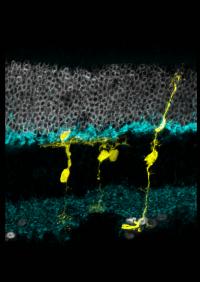 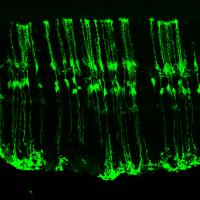 Glia Cells in the Retina