Geologists who analyzed 40 meteorites that fell to Earth from Mars unlocked secrets of the Martian atmosphere hidden in the chemical signatures of these ancient rocks. Their study, published April 17 in the journal Nature, shows that the atmospheres of Mars and Earth diverged in important ways very early in the 4.6 billion year evolution of our solar system.

The results will help guide researchers' next steps in understanding whether life exists, or has ever existed, on Mars and how water—now absent from the Martian surface—flowed there in the past.

Heather Franz, a former University of Maryland research associate who now works on the Curiosity rover science team at the NASA Goddard Space Flight Center, led the study with James Farquhar, co-author and UMD geology professor. The researchers measured the sulfur composition of 40 Mars meteorites—a much larger number than in previous analyses. Of more than 60,000 meteorites found on Earth, only 69 are believed to be pieces of rocks blasted off the Martian surface.

The meteorites are igneous rocks that formed on Mars, were ejected into space when an asteroid or comet slammed into the red planet, and landed on Earth. The oldest meteorite in the study is about 4.1 billion years old, formed when our solar system was in its infancy. The youngest are between 200 million and 500 million years old.

Studying Martian meteorites of different ages can help scientists investigate the chemical composition of the Martian atmosphere throughout history, and learn whether the planet has ever been hospitable to life. Mars and Earth share the basic elements for life, but conditions on Mars are much less favorable, marked by an arid surface, cold temperatures, radioactive cosmic rays, and ultraviolet radiation from the Sun. Still, some Martian geological features were evidently formed by water – a sign of milder conditions in the past. Scientists are not sure what conditions made it possible for liquid water to exist on the surface, but greenhouse gases released by volcanoes likely played a role.

Sulfur, which is plentiful on Mars, may have been among the greenhouse gases that warmed the surface, and could have provided a food source for microbes. Because meteorites are a rich source of information about Martian sulfur, the researchers analyzed sulfur atoms that were incorporated into the rocks.

In the Martian meteorites, some sulfur came from molten rock, or magma, which came to the surface during volcanic eruptions. Volcanoes also vented sulfur dioxide into the atmosphere, where it interacted with light, reacted with other molecules, and settled on the surface.

Sulfur has four naturally occurring stable isotopes, or different forms of the element, each with its own atomic signature. Sulfur is also chemically versatile, interacting with many other elements, and each type of interaction distributes sulfur isotopes in a different way. Researchers measuring the ratios of sulfur isotopes in a rock sample can learn whether the sulfur was magma from deep below the surface, atmospheric sulfur dioxide or a related compound, or a product of biological activity.

Using state-of-the-art techniques to track the sulfur isotopes in samples from the Martian meteorites, the researchers were able to identify some sulfur as a product of photochemical processes in the Martian atmosphere. The sulfur was deposited on the surface and later incorporated into erupting magma that formed igneous rocks. The isotopic fingerprints found in the meteorite samples are different than those that would have been produced by sulfur-based life forms.

The researchers found the chemical reactions involving sulfur in the Martian atmosphere were different than those that took place early in Earth's geological history. This suggests the two planets' early atmospheres were very different, Franz said.

The exact nature of the differences is unclear, but other evidence suggests that soon after our solar system formed, much of Mars' atmosphere was lost, leaving it thinner than Earth's, with lower concentrations of carbon dioxide and other gases. That is one reason why Mars is too cold for liquid water today—but that may not always have been the case, said Franz.

"Climate models show that a moderate abundance of sulfur dioxide in the atmosphere after volcanic episodes, which have occurred throughout Mars' history, could have produced a warming effect which may have allowed liquid water to exist at the surface for extended periods," Franz said. "Our measurements of sulfur in Martian meteorites narrow the range of possible atmospheric compositions, since the pattern of isotopes that we observe points to a distinctive type of photochemical activity on Mars, different from that Natureon early Earth."

Periods of higher levels of sulfur dioxide may help explain the red planet's dry lakebeds, river channels and other evidence of a watery past. Warm conditions may even have persisted long enough for microbial life to develop.

The team's work has yielded the most comprehensive record of the distribution of sulfur isotopes on Mars. In effect, they have compiled a database of atomic fingerprints that provide a standard of comparison for sulfur-containing samples collected by NASA's Curiosity rover and future Mars missions. This information will make it much easier for researchers to zero in on any signs of biologically produced sulfur, Farquhar said.

-University of Maryland College of Computer, Mathematical, and Natural Sciences- 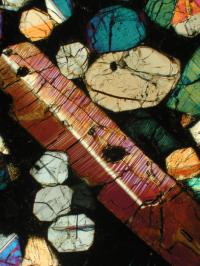