NEW BRUNSWICK, N.J. – A team of Rutgers University scientists led by Richard H. Ebright and Eddy Arnold has determined the three-dimensional structure of the transcription initiation complex, the key intermediate in the process by which cells read out genetic information in DNA.

In a paper to be published in Science and released online today at Science Express, the Rutgers scientists show how the "molecular machine" responsible for transcription initiation – a protein complex that consists of the enzyme RNA polymerase and the initiation factor sigma – recognizes a specific site on DNA preceding a gene, binds to DNA, unwinds the DNA helix, and pre-organizes the unwound DNA to enable subsequent reactions.

"Determining the structure of a functional, specific transcription initiation complex has been a goal of researchers for three decades," said Ebright, a professor in the Department of Chemistry and Chemical Biology at Rutgers, a laboratory director at the Waksman Institute of Microbiology at Rutgers, and an investigator of the Howard Hughes Medical Institute.

"This study represents a very significant contribution to our understanding of the workings of this central macromolecular machine of gene expression," said Peter von Hippel, professor of biophysical chemistry and molecular biology at the University of Oregon, who was not part of the study. "A particular significance of this work is the very systematic way the researchers built nucleic acid scaffolds bound to various nucleic acid and protein complexes involved in the various steps of initiation and were able to show in detail how the sigma initiation factor interacts with the various individual nucleotide residues involved in the recognition of the important elements of the promoter."

"While the structures of several RNA polymerase enzymes are known, no previous structures show the polymerase, including an initiation factor and the promoter DNA, poised to begin elongation," said Peter Preusch of the National Institutes of Health's National Institute of General Medical Sciences, which partially funded the work. "This detailed three-dimensional structure informs our understanding of how transcription initiation occurs and may lead to new ways to manipulate this fundamental process for therapeutic purposes." 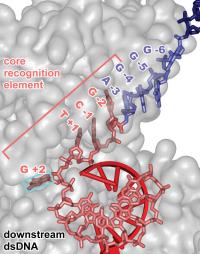 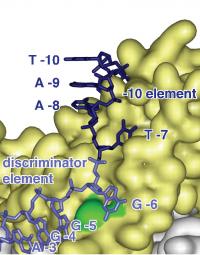