Bosons and fermions, the two classes into which all particles--from the sub-atomic to atoms themselves--can be sorted, behave very differently under most circumstances. While identical bosons like to congregate, identical fermions tend to be antisocial. However, in one dimension--imagine particles that can only move on a line--bosons can become as stand-offish as fermions, so that no two occupy the same position. Now, new research shows that the same thing--bosons acting like fermions--can happen with their velocities. The finding adds to our fundamental understanding of quantum systems and could inform the eventual development of quantum devices.

"All particles in nature come in one of two types, depending on their 'spin,' a quantum property with no real analogue in classical physics," said David Weiss, Distinguished Professor of Physics at Penn State and one of the leaders of the research team. "Bosons, whose spins are whole integers, can share the same quantum state, while fermions, whose spins are half integers, cannot. When the particles are cold or dense enough, bosons behave completely differently from fermions. Bosons form 'Bose-Einstein condensates,' congregating in the same quantum state. Fermions, on the other hand, fill available states one by one to form what is called a 'Fermi sea.'"

Researchers at Penn State have now experimentally demonstrated that, when bosons expand in one dimension--the line of atoms is allowed spread out to become longer--they can form a Fermi sea. A paper describing the research appears March 27, 2020 in the journal Science.

"Identical fermions are antisocial, you can't have more than one in the same place so when they are very cold they don't interact," said Marcos Rigol, professor of physics at Penn State and the other leader of the research team. "Bosons can be in the same place, but this becomes energetically too costly when their interactions are very strong. As a result, when constrained to move in one-dimension, their spatial distribution can look like that of non-interacting fermions. Back in 2004, David's research group experimentally demonstrated this phenomenon, which was theoretically predicted in the 1960s."

Even though the spatial properties of strongly interacting bosons and non-interacting fermions are the same in one dimension, bosons can still have the same velocities as each other, while fermions cannot. This is due to the fundamental nature of the particles.

"In 2005, Marcos, then a graduate student, predicted that when strongly interacting bosons expand in one dimension, their velocity distribution will form a Fermi sea," said Weiss. "I was very excited to collaborate with him in demonstrating this striking phenomenon."

The research team creates an array of ultracold one-dimensional gases made up of bosonic atoms ('Bose gases') using an optical lattice, which uses laser light to trap the atoms. In the light trap, the system is at equilibrium and the strongly interacting Bose gases have spatial distributions like fermions, but still have the velocity distributions of bosons. When the researchers shut off some of the trapping light, the atoms expand in one dimension. During this expansion, the velocity distribution of the bosons smoothly transforms into a one that is identical to fermions. The researchers can follow this transformation as it happens.

"The dynamics of ultracold gases in optical lattices are the source of many novel fascinating phenomena that only recently have started to be explored," said Rigol. "For example, Dave's group showed in 2006 that something as universal as temperature is not well defined after Bose gases undergo dynamics in one dimension. My collaborators and I related this finding to a beautiful underlying mathematical property of the theoretical models describing his experiments, known as 'integrability.' Integrability plays a central role in our newly observed dynamical fermionization phenomenon."

Because the system is "integrable," the researchers can understand it in great detail and by studying the dynamical behavior of these one-dimensional gases, the Penn State team hopes to address broad issues in physics.

Dynamical, interacting quantum systems are an important part of fundamental physics. They are also increasing technologically relevant, as many actual and proposed quantum devices are based on them, including quantum simulators and quantum computers.

"We now have experimental access to things that if you would have asked any theorist working in the field ten years ago 'will we see this in our lifetime?' they would have said 'no way,'" said Rigol.

In addition to Rigol and Weiss, the research team at Penn State includes Joshua M. Wilson, Neel Malvania, Yuan Le, and Yicheng Zhang. The research was funded by the U.S. National Science Foundation and the U.S. Army Research Office. Computations were performed at the Penn State Institute for Computational and Data Sciences.

Quantum copycat: Researchers find a new way in which bosons behave like fermions 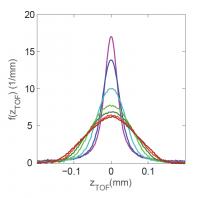