Fairbanks, Alaska -- As the Arctic warms, greenhouse gases will be released from thawing permafrost faster and at significantly higher levels than previous estimates, according to survey results from 41 international scientists published in the Nov. 30 issue of the journal Nature.

Permafrost thaw will release approximately the same amount of carbon as deforestation, say the authors, but the effect on climate will be 2.5 times bigger because emissions include methane, which has a greater effect on warming than carbon dioxide.

The survey, led by University of Florida researcher Edward Schuur and University of Alaska Fairbanks graduate student Benjamin Abbott, asked climate experts what percentage of the surface permafrost is likely to thaw, how much carbon will be released and how much of that carbon will be methane. The authors estimate that the amount of carbon released by 2100 will be 1.7 to 5.2 times larger than reported in recent modeling studies, which used a similar warming scenario.

"The larger estimate is due to the inclusion of processes missing from current models and new estimates of the amount of organic carbon stored deep in frozen soils," Abbott said. "There's more organic carbon in northern soils than there is in all living things combined; it's kind of mind boggling."

Northern soils hold around 1,700 billion gigatons of organic carbon, around four times more than all the carbon ever emitted by modern human activity and twice as much as is now in the atmosphere, according to the latest estimate. When permafrost thaws, organic material in the soil decomposes and releases gases such as methane and carbon dioxide.

"In most ecosystems organic matter is concentrated only in the top meter of soils, but when arctic soils freeze and thaw the carbon can work its way many meters down, said Abbott, who studies how carbon is released from collapsed landscapes called thermokarsts – a process not accounted for in current models. Until recently that deep carbon was not included in soil inventories and it still is not accounted for in most climate models.

"We know about a lot of processes that will affect the fate of arctic carbon, but we don't yet know how to incorporate them into climate models," Abbott said. "We're hoping to identify some of those processes and help the models catch up."

Most large-scale models assume that permafrost warming depends on how much the air above the permafrost is warming. Missing from the models, say the authors, are processes such as the effects of abrupt thawing that can melt an ice wedge, result in collapsed ground and accelerate additional thawing.

"This survey is part of the scientific process, what we think is going to happen in the future, and how we come up with testable hypotheses for future research," Schurr said. "Our survey outlines the additional risk to society caused by thawing of the frozen North and the need to reduce fossil fuel use and deforestation."

By integrating data from previous models with expert predictions the authors hope to provide a frame of reference for scientists studying all aspects of climate change.

Schuur, Abbott and the 41 survey participants, which include several other UAF researchers, are members of the Vulnerability of Permafrost Carbon Research Coordination Network. http://www.biology.ufl.edu/permafrostcarbon/

A time-lapse video of a North Slope tundra landscape in motion: Hourly images from July-August 2010 of the headwall of a thaw slump on the shore of Horn Lake near the site of the massive 2007 Anaktuvuk River fire. http://www.personal.psu.edu/seg19/blogs/sarah_godsey/ 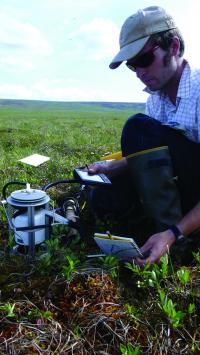