Radioactive waste decaying down at the dump needs millions of years to stabilize. The element Neptunium, a waste product from uranium reactors, could pose an especially serious health risk should it ever seep its way into groundwater – even 5 million years after its deposition. Now, researchers at the University of Copenhagen have shown the hazardous waste can be captured and contained. The means? A particular kind of green goop that occurs naturally in oxygen-poor water.

Bo C. Christiansen is a geochemist at the University of Copenhagen who specializes in "green rust". In a recent article published in the prestigious journal Geochimica et Cosmochimica Acta, Christiansen describes how green rust is able to, so to say, encapsulate and contain neptunium. It's an insight that can greatly influence how and where to dispose of radioactive waste.

For years green rust was perceived as a problem. The substance was investigated primarily by material scientists who wanted to know how to avoid green rust formation in reinforced concrete. In recent years however, a group of chemists, physicists and geologists at the Department of Chemistry's Nano-Geoscience Research Group have been studying the substance's beneficial properties. The results have exceeded all expectations.

"Neptunium is a relatively exotic problem. Not a lot of people need to safeguard a radioactive waste depot. But green rust appears to be effective against nearly any kind of pollution," says Bo Christiansen.

Green rust is a type of clay referred to as an anionic clay. Because it consists of iron which has not entirely rusted, green rust has an electron deficit. This makes it react very readily with other pollutants, some of which are quite prevalent.

"A while ago we showed how green rust can react with the carcinogenic chromium (6) and convert it to chromium (3). "Besides being non-toxic, chromium (3) is one of the trace elements that the human body needs," says Christiansen.

Large quantities of green rust are rarely present at any given moment due to it's very high level of reactivity. On the other hand, it's easy to make. Green rust will form if iron sulphate and caustic soda are present in water. But it won't last long. As soon as oxygen is added to the mix, the rust will become ordinary red rust, known by its ochre characteristics.

Experiments demonstrating green rust's ability to immobilize neptunium have been conducted partly at SKB – Swedish Nuclear Fuel and Waste Management's full scale pilot research facility at Okskarshamn on the Swedish east coast and also in part at the Karlsruhe Institute of Technology in Germany.

Typically, radioactive waste is disposed of in iron-lined copper canisters. This is suitable as long as the canisters are surrounded by water. However, any future ice-age will draw water levels downwards. Should the copper dry, it will begin to decay. And as the copper disappears, it will only take a short time for the iron to begin rusting away. Ultimately, the radioactive waste gains entry to the groundwater. Therefore, to ensure the security of radioactive waste, green rust could be established to surround the canisters.

"Green rust is no quick-fix to clean up after pollution that suddenly presents itself. But our experiments have shown the surprising result that nature can help to clean itself. Even when the pollution is with a substance as serious as neptunium," says Bo Christiansen who expects the results to inform and be applied to the design and modeling of future radioactive storage. 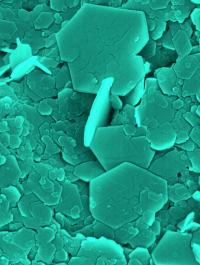