X-ray imaging has been actively utilized in the fields of industrial material inspection, medical diagnosis and scientific research. The key component to detect X-ray is the scintillator which can convert X-ray photons to visible photons and then be detected by a photodiode array. Despite of decades of intensive research of scintillators, the performances of conventional scintillators are still far from ideal. While the emerging lead halide perovskite starts to show very promising characters, there are still several unpleasant factors such as strong self-absorption, relatively low light yield and lead toxicity that limit their practical application.

In a new paper published in Light Science & Application, a team of researchers, led by Professor Yang Yang from State Key Laboratory of Modern Optical Instrumentation, College of Optical Science and Engineering, International Research Center for Advanced Photonics, Zhejiang University, China, and co-workers have developed a nontoxic Cs2Ag0.6Na0.4In0.85Bi0.15Cl6 double perovskite scintillator, which exhibits not only a high light yield but also long-term stability under continuous thermal treatment and X-ray irradiation. Given the high light output and fast light decay of this scintillator, static X-ray imaging was attained under an extremely low dose of ~1 μGyair, and dynamic X-ray imaging of finger bending without a ghosting effect was demonstrated under a low dose rate of 47.2 μGyair s-1. These results reveal the huge potential in exploring scintillators beyond lead halide perovskites, not only for avoiding toxic elements but also for achieving higher performance.

Scintillators are capable of converting X-ray photons into visible photons. The plausible mechanism of X-ray scintillation can be described as follows: The radiation energy is first absorbed by the heavy atoms of the scintillators mainly through the photoelectric effect and inelastic Compton scattering, ejecting massive hot electrons; then, these electrons thermalize on an ultrafast timescale and are captured by luminescent centres. These scientists summarize the design principles of scintillator:

"The realization of high-resolution X-ray image under an extreme low X-ray dose demonstrate that the X-ray dose requirement for medical X-ray imaging can be significantly reduced in the future." They added.

"The presented scintillators can be used in X-ray computed tomography (CT) and dynamic X-ray imaging, which is important to understand many biological processes and is also useful for online monitoring of industrial process." The scientists forecast. 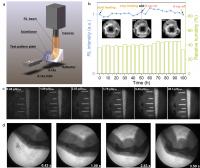