The dangers of explosive fuel could soon be reduced with the development of a new material that is comprised of extremely long polymer chains that can reduce fuel misting and consequential explosiveness. The polymers of which the material is comprised could make the handling of fuel much safer, and reduce the injury and destruction that results from a collision. While it is well-known that ultralong polymers would offer an appealing reduction in fuel explosiveness, creating such chains that don't compromise other aspects of the fuel has been challenging. As the length of a polymer increases, it undergoes larger stress along its molecular backbone when subjected to a force called shearing flow. This can lead to breaks in the covalent bonds; this "shear degradation" causes the chains to shorten to a point where their valuable effects are lost. What's more, the long polymers themselves can clog fuel handling systems and engines. A long polymer that reassembles when it breaks would seem an appealing solution, except that such a polymer could adhere to itself, forming a ring shape that ultimately prevents its usefulness. Based on current knowledge, Ming-Hsin Wei et al. calculated the ideal chain length and strength required to avoid the formation of rings and achieve the right level of end strength to self-assemble. The team then turned to charge-assisted hydrogen bonds, which are typically three times stronger than ordinary hydrogen bonds, placing these at the end of two different polymers that could connect together into longer chains with sufficient bonding strength. The result is a polymer that can break apart when sheared during flow, but that will reassemble into the super-long chains needed to prevent misting. In tests, these long polymers resulted in a significant reduction in misting and explosiveness, even after repeated passage through a fuel pump. Furthermore, they are compatible with current engines and did not lead to a decrease in engine efficiency. These results indicate an important advancement that could lead to much safer fuel transportation and use. A Perspective by Michael Jaffe and Sahitya Allam discusses the implications of this new fuel additive in more detail.

Timeline of Research and Development 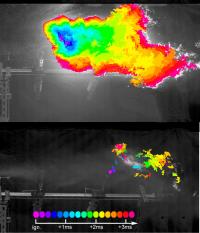