A new study of dozens of wild fish species commonly consumed in the Peruvian Amazon says that people there could suffer major nutritional shortages if ongoing losses in fish biodiversity continue. Furthermore, the increasing use of aquaculture and other substitutes may not compensate. The research has implications far beyond the Amazon, since the diversity and abundance of wild-harvested foods is declining in rivers and lakes globally, as well as on land. Some 2 billion people globally depend on non-cultivated foods; inland fisheries alone employ some 60 million people, and provide the primary source of protein for some 200 million. The study appears this week in the journal Science Advances.

The authors studied the vast, rural Loreto department of the Peruvian Amazon, where most of the 800,000 inhabitants eat fish at least once a day, or an average of about 52 kilograms (115 pounds) per year. This is their primary source not only of protein, but fatty acids and essential trace minerals including iron, zinc and calcium. Unfortunately, it is not enough; a quarter of all children are malnourished or stunted, and more than a fifth of women of child-bearing age are iron deficient.

Threats to Amazon fisheries, long a mainstay for both indigenous people and modern development, are legion: new hydropower dams that pen in big migratory fish (some travel thousands of miles from Andes headwaters to the Atlantic estuary and back); soil erosion into rivers from deforestation; toxic runoff from gold mines; and over-exploitation by fishermen themselves, who are struggling to feed fast-growing populations. In Loreto, catch tonnages are stagnating; some large migratory species are already on the decline, and others may be on the way. It is the same elsewhere; globally, a third of freshwater fish species are threatened with extinction, and 80 are already known to be extinct, according to the World Wildlife Fund.

Different species of animals and plants contain different ratios of nutrients, so biodiversity is key to adequate human nutrition, say the researchers. "If fish decline, the quality of the diet will decline," said the study's senior coauthor, Shahid Naeem, director of Columbia University's Earth Institute Center for Environmental Sustainability. "Things are definitely declining now, and they could be on the path to crashing eventually."

To study the region's fish, the study's lead author, then-Columbia PhD. student Sebastian Heilpern, made numerous shopping trips to the bustling Belén retail market in the provincial capital of Iquitos. He also visited the city's Amazon River docks, where wholesale commerce begins at 3:30 in the morning. He and another student bought multiple specimens of as many different species as they could find, and ended up with 56 of the region's 60-some main food species. These included modest-size scale fish known locally as ractacara and yulilla; saucer-shaped palometa (related to piranha); and giant catfish extending six feet or more. (The researchers settled for chunks of the biggest ones.)

The fish were flown on ice to a government lab in Lima, where each species was analyzed for protein, fatty acids and trace minerals. The researchers then plotted the nutritional value of each species against its probability of surviving various kinds of ongoing environmental degradation. From this, they drew up multiple scenarios of how people's future diet would be affected as various species dropped out of the mix.

Overall, the biomass of fish caught has remained stable in recent years. However, large migratory species, the most vulnerable to human activities, comprise a shrinking portion, and as they disappear, they are being replaced by smaller local species. Most fish contain about the same amount of protein, so this has not affected the protein supply. And, the researchers found, many smaller fish in fact contain higher levels of omega-3 fatty acids, so their takeover may actually increase those supplies. On the other hand, as species compositions lean more to smaller fish, supplies of iron, zinc are already going down, and will continue to decline, they say.

"Like any other complex system, you see a tradeoff," said Heilpern. "Some things are going up while other things are going down. But that only lasts up to a point." Exactly which species will fill the gaps left when others decline is difficult to predict--but the researchers project that the overall nutritional value of the catch will nosedive around the point where 40 of the 60 food species become scarce or extinct. "You have a tipping point, where the species that remain can be really lousy," said Heilpern.

One potential solution: in many places around the world where wild foods including fish and bush meat (such as monkeys and lizards) are declining, people are turning increasingly to farm-raised chicken and aquaculture--a trend encouraged by the World Bank and other powerful organizations. This is increasingly the case in Loreto. But in a separate study published in March, Heilpern, Naeem and their colleagues show that this, too, is undermining human nutrition.

The researchers observed that chicken production in the region grew by about three quarters from 2010 to 2016, and aquaculture nearly doubled. But in analyzing the farmed animals' nutritional values, they found that they typically offer poorer nutrition than a diverse mix of wild fish. In particular, the move to chicken and aquaculture will probably exacerbate the region's already serious iron deficiencies, and limit supplies of essential fatty acids, they say. "Because no single species can offer all key nutrients, a diversity of species is needed to sustain nutritionally adequate diets," they write.

Besides this, chicken farming and aquaculture exert far more pressure on the environment than fishing. In addition to encouraging clearing of forests to produce feed for the animals, animal farming produces more more greenhouse gases, and introduces fertilizers and other pollutants into nearby waters, says Heilpern.

"Inland fish are fundamental for nutrition in many low-income and food-deficit countries, and of course landlocked countries," said John Valbo Jørgensen, a Rome-based expert on inland fisheries with the UN Food and Agriculture Organization. "Many significant inland fisheries, including those of Peru, take place in remote areas with poor infrastructure and limited inputs. It will not be feasible to replace those fisheries with farmed animals including fish."

Heilpern is now working with the Wildlife Conservation Society to produce an illustrated guide to the region's fish, including their nutritional values, in hopes of promoting a better understanding of their value among both fishermen and consumers.

The other authors of the new study are Ruth deFries and Maria Uriarte of the Earth Institute; and Kathryn Fiorella, Alexander Flecker and Suresh Sethi of Cornell University. 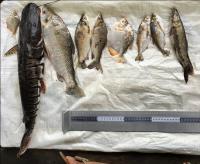 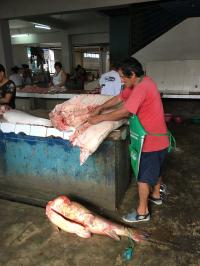