The global climate is a complex machine in which some pieces are separate, yet others are connected. Scientists try to discover the connections to predict what will happen to our climate, especially in a future with more heat-trapping gases.

A dramatic pattern in our planet's climate history involves paroxysms in Arctic temperatures. During the last ice age, tens of thousands of years ago, Greenland repeatedly warmed by about 10 degrees Celsius over just a few decades and then gradually cooled. Meanwhile the Southern Hemisphere climate stayed fairly stable, with only weak and long-delayed echoes of the temperature chaos up north.

But new University of Washington research shows the fierce winds circling Antarctica -- an important lever on the global climate -- shifted quickly in response to the Northern Hemisphere temperature spikes.

"It's most surprising that we can see these really abrupt changes in the Northern Hemisphere making it very quickly to the Southern Hemisphere," said first author Bradley Markle, a UW doctoral student in Earth and space sciences. "The atmospheric circulation is tightly connected across the globe during these events."

The study is published in the January issue of Nature Geoscience.

Researchers used evidence from a 2-mile-long West Antarctic ice core. That ice core's thick annual layers provide precise dating that allows scientists to match its climate history with those in distant Greenland ice records. The wild northern temperature swings, known as Dansgaard-Oeschger events, are thought to be natural oscillations in the climate system. They have been reproduced in the most sophisticated climate models covering the ice age period. These same models also show a shift in Southern Hemisphere winds.

The new study is the observational support for this shift in the winds.

The Antarctic ice core shows that Southern Ocean winds shifted at the same time, or at most within a few decades, of each rapid Greenland warming event. Antarctic air temperatures, on the other hand, are connected through the slower-moving oceans and took about two centuries to respond.

It was already well known that tropical rain bands and the Northern Hemisphere jet stream adjust to the temperature balance between hemispheres. But there was little historical evidence for winds blowing over the icy southern seas.

The new study uses chemical clues in the 70-thousand-year ice core record. As gusting winds evaporate seawater, the fraction of heavier to lighter hydrogen and oxygen atoms in vapor depend on the ocean's temperature. When this moisture eventually falls as snow over Antarctica, it contains a signature of the latitude where it evaporated.

Results show that the winds shifted north toward the equator when Greenland warmed, through a signal that was communicated through the atmosphere.

Besides being important for Antarctic climate, the Southern Ocean winds influence rainfall in South America, Australia and southern Africa. These winds also play a role in long-term climate feedbacks that involve Antarctic sea ice and the uptake of atmospheric carbon dioxide by the oceans.

"There's a general understanding in the climate science community that global warming is not just about temperature change, it's also about changing winds," Steig said.

While there is some evidence that Southern Ocean winds may be changing today, the causes would be different from those in the study, the authors cautioned. But the results establish a new bridge between the two hemispheres, and support the results from computer models that create detailed simulations of the global climate over thousands of years.

"This gives us confidence that the models that we're using to make those calculations are getting it about right," Steig said.

Rapid Arctic warming has in the past shifted Southern Ocean winds 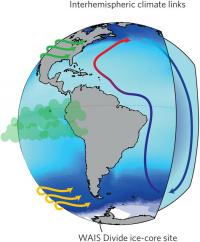 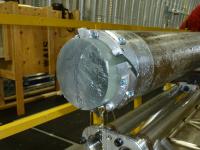