Since 1989, in 63 nature reserves in Germany the total biomass of flying insects has decreased by more than 75 percent. This decrease has long been suspected but has turned out to be more severe than previously thought. Ecologists from Radboud University together with German and English colleagues published these findings in the scientific journal PLoS ONE on October 18th.

In recent years, it became clear that the numbers of many types of insects such as butterflies and bees were declining in Western Europe and North America. 'However, the fact that flying insects are decreasing at such a high rate in such a large area is an even more alarming discovery,' states project leader at the Radboud University Hans de Kroon.

Entomologists (insect researchers) in Krefeld, Germany, led by Martin Sorg and Heinz Schwan, collected data over the past 27 years in 63 different places within nature reserves across Germany. Flying insects were trapped in malaise traps and the total biomass was then weighed and compared. The researchers from Nijmegen, Germany and England have now been able to analyse this treasure trove of data for the first time.

The researchers discovered an average decline of 76 percent in the total insect mass. In the middle of summer, when insect numbers peak, the decline was even more severe at 82 percent. According to Caspar Hallmann from Radboud University who performed the statistical analyses, 'All these areas are protected and most of them are managed nature reserves. Yet, this dramatic decline has occurred.'

The exact causes of the decline are still unclear. Changes in the weather, landscape and plant variety in these areas are unable to explain this. The weather might explain many of the fluctuations within the season and between the years, but it doesn't explain the rapid downward trend.

A decline in other parts of the world too

Researchers can only speculate about the possible causes. 'The research areas are mostly small and enclosed by agricultural areas. These surrounding areas inflict flying insects and they cannot survive there. It is possible that these areas act as an 'ecological trap' and jeopardize the populations in the nature reserves,' explains Hallmann. It is likely that the results are representative for large parts of Europe and other parts of the world where nature reserves are enclosed by a mostly intensively used agricultural landscape.

'As entire ecosystems are dependent on insects for food and as pollinators, it places the decline of insect eating birds and mammals in a new context,' states Hans de Kroon. 'We can barely imagine what would happen if this downward trend continues unabated.'

Because the causes of the decline are not yet known, it is difficult to take any concrete measures. The researchers hope that these findings will be seen as a wake-up call and prompt more research into the causes and support for long-term monitoring.

De Kroon: 'The only thing we can do right now is to maintain the utmost caution. We need to do less of the things that we know have a negative impact, such as the use of pesticides and prevent the disappearance of farmland borders full of flowers. But we also have to work hard at extending our nature reserves and decreasing the ratio of reserves that border agricultural areas.' 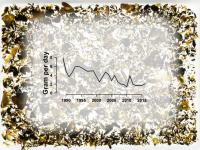