Photosynthesis requires a mechanism to produce large amounts of chemical energy without losing the oxidative power needed to break down water. A Japanese research team has clarified part of this mechanism, marking another step towards the potential development of artificial photosynthesis. The findings were published on February 27 in the online edition of The Journal of Physical Chemistry Letters.

During the water-splitting reaction in photosynthesis, plants produce oxygen by converting solar energy into chemical energy, providing the energy source necessary for their survival. This reaction is carried out by a protein complex in chloroplasts (located in leaves) called the photosystem II complex (see figure 1).

In 2015 Professor Kobori's research team succeeded in analyzing the electronic interactions and 3-dimensional placement of the initial charge separation produced directly after photoreaction in the photosynthetic reaction center of purple bacteria, which do not cause the oxidation potential for water-splitting. However, in the photosystem II complex for higher plants, the configuration of the initial charge separation state was unclear, and it was a mystery as to how it led to an effective water-splitting reaction while retaining the high oxidative power.

The scientists extracted thylakoid membranes (where the photoreaction takes place in photosynthesis) from spinach, added a reducing agent, and irradiated the samples. This enabled them to detect microwave signals from the initial charge separation state to a degree of accuracy of a 10 millionth of a second (see figure 3a). They developed a method of analyzing the microwave signals using spin polarization imaging. For the first time it was possible to carry out 3D view analysis of the configuration of the electric charge produced directly after exposure to light as a reactive intermediate. This was done with an accuracy to within 10 millionth of a second, as consecutive photography (see figure 3b). Based on this visualization, they also quantified the electronic interaction that occurs when electron orbits overlap for molecules with electric charges (figure 3c).

The initial electric charge separation structure clarified by this analysis was not very different from the structure before the reaction, but the imaging analysis showed that the positive electric charge that occurred in the pigment as a reactive intermediate existed disproportionately in chlorophyll single molecules (figure 3b, c). It suggests that there is strong stabilization caused by electrostatic interaction between the charges.

It has been revealed that the return of the negative charge is suppressed, since the overlap between electron orbits is greatly limited by the insulating effect of the vinyl group terminus. This means that it becomes possible to use the high oxidizing powers of the positive charge in chlorophyll (PD1) for the subsequent oxidative decomposition of water.

Based on these findings, researchers have unlocked part of the mechanism to effectively produce high amounts of chemical energy without loss of the oxidative power needed to split water in photosynthesis. These findings could help to design an "artificial photosynthesis system" that can provide a clean energy source by efficiently converting solar energy into large amounts of electricity and hydrogen. The application of this principle could contribute to solving issues with energy, the environment and food shortages.

Mechanism behind the electric charges generated by photosynthesis 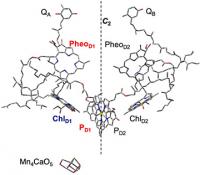 Mechanism Behind the Electric Charges Generated by Photosynthesis