A bull's-eye in the hunt for planets: astronomers at the Max Planck Institute for Astronomy have discovered and directly imaged a faint celestial body that orbits the star GJ 758. Its mass is estimated to be between 10 and 40 Jupiter masses. Accordingly, it is either a giant planet or a brown dwarf, a would-be sun. One thing is certain: with a temperature of around 330 degrees Celsius, GJ 758 B is the coldest companion of a Sun-like star ever to be directly imaged (arXiv.org/abs/0911.1127).

More than 400 exoplanets are currently known to researchers. Most of these planets, which orbit distant stars, have been detected indirectly: by observing how they affect the movement or the brightness of their central star. It is much more difficult to image exoplanets directly as they are light years away. They therefore appear to us to be directly adjacent to their mother sun and are hopelessly eclipsed by it. The venture is like trying to photograph a fire-fly circling a 300 watt floodlight one kilometre away. However, images provide valuable information on the orbit of the planet, its temperature and the chemical composition of its atmosphere.

In the search for extrasolar planets, astronomers have succeeded in recording such an image with a new instrument - and even struck it lucky during the first observations. The camera, called HiCIAO, is installed on the 8-metre Subaru telescope on Mauna Kea (Hawaii). The researchers used the latest adaptive optics to remove the blur caused by air turbulences. Although on every individual image the tiny signal of the planet is drowned out by the residual halo of the central star, the clever combination of time sequences of individual images, so-called "Angular Differential Imaging" (ADI), enabled astronomers to suppress the halo of the central star to such an extent that the weak glow of the companion GJ 758 B was visible in the final image.

Before this discovery only ten possible exoplanets had been imaged directly. The conditions in these systems differ greatly from those in our own, however: either the planet orbits its central star at a very great distance or the temperature of the companion is higher than 1,000 degrees Celsius and thus corresponds more to the temperature of a star than a planet.

Compared to the other candidates, GJ 758 B has much more in common with the large bodies in our planetary system: it orbits a Sun-like star at a distance that corresponds to those of the outer solar planets - the distance to its central star is roughly the same as the distance between Neptune and the Sun. The overall dimensions of the orbit of GJ 758 B can only be estimated from the data available, however. Most probable is an average separation from the central star of 59 astronomical units (corresponding to 8.85 billion kilometres).

Particularly interesting is the relatively low temperature of the supposed planet, which is between 280 and 370 degrees Celsius. "This corresponds to the temperature of an oven or that of the sun-facing side of the planet Mercury," says Christian Thalmann from the Max Planck Institute for Astronomy in Heidelberg, first author of the publication. "GJ 758 B is therefore the coldest companion of a Sun-like star ever to be imaged directly."

The most remote planet of our solar system, Neptune, receives only about 1/900 of the sunlight which reaches Earth, and has a surface temperature of minus 200 degrees Celsius. GJ 758 B is at least the same distance from its central star as Neptune. Its significantly higher temperature points to this body still being in the contraction phase, during which the young, massive gas planets convert their gravitational energy into heat. The temperature, age and mass of such a contracting body are linked: the more mass it has, the longer it takes for it to radiate its surplus heat into space and achieve its equilibrium temperature.

"This explains why the mass of GJ 758 B cannot be determined more accurately: its measured infrared brightness corresponds either to that of a 700 million-year-old planet with 10 Jupiter masses or that of an 8,700 million-year-old companion with 40 Jupiter masses," explains Markus Janson from the University of Toronto, former researcher at the Max Planck Institute for Astronomy. Since the central stars are formed at the same time as their planets, an accurate determination of the star's age would remove this uncertainty - the observation data available to date do not yet allow such an age determination.

GJ 758 B was detected during two independent observation runs in May and August 2009. The images show that it is no coincidence that GJ 758 B and the star GJ 758 are close to each other. As do many other close stars, GJ 758 has its common proper motion: it changes its position in the night sky, if only very slowly. In the images, GJ 758 B moves exactly like a planet that is shackled to its mother sun by gravity.

The image taken in August is of a somewhat higher quality and shows a further object slightly closer to the central star. It could be a second companion, which would then be named GJ 758 C. A new, temporally staggered observation must be carried out, however, to investigate whether this object also participates in the common proper motion of the system, or whether it is a celestial body in the background.

The first portrait of a cool planet 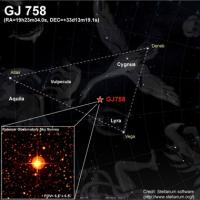