Optical solitons are nonlinear optical wave-packets that can maintain their profile during the propagation even in the presence of moderate perturbations, offering useful applications in optical communications, all-optical information processing as well as ultrafast laser techniques. The interaction between optical solitons exhibit many particle-like properties, and has been widely investigated for decades. Particularly, the bound-states of optical solitons in nonlinear dissipative systems, as a result of balanced interactions, have been found to manifest unique matter-light analogies and are epitomized by the "soliton molecules" - compact multi-soliton structures that propagate as invariant single entities. The dynamics of soliton molecules has attracted wide interest, especially the synthesis and dissociation of soliton molecules that are reminiscent of chemical reactions. However, the study of soliton molecules mostly relied on uncontrolled random excitations, and has long plateaued at single-object level without exploring the stochastic and statistical properties that involve massive number of solitons, making it difficult to perform higher-level study of multi-soliton dynamics.

In a new paper published in Light Science & Application, a team of scientists, led by Dr. Wenbin He and Dr. Meng Pang in Prof. Philip Russell's Division of Max Planck Institute for the Science of Light in Germany has developed a unique platform, named as "parallel optical-soliton reactors", which can host massively dynamic events of soliton molecules. Such parallel reactors, resembling chemical reactors, can isolate and host multiples solitons, and then manipulate their interactions through various all-optical methods. When hundreds of such parallel reactors are operated simultaneously with carefully prepared initial states and control techniques, on-demand synthesis and dissociations of soliton molecules can be initiated in massively numbers, unfolding an a novel panorama of multi-soliton dynamics that are stochastic in nature. Moreover, statistical rules are found out of the massively parallel reactions that highly resembles classic chemical kinetics, which promote the conventional matter-light analogy into a collective level. These results bring a higher-level insight to soliton dynamics that can benefit both fundamental researches for nonlinear systems but also practical applications that involves massive number of optical solitons.

The parallel optical-soliton reactors are based on a unique optomechanical lattice that is created using an optoacoustically mode-locked fibre laser. The key component is actually only a short-piece of photonic crystal fibre (PCF) - a special micro-structured optical fibre that has a micro-core surrounded by an array of hollow channels. These scientists summarize the operational principle of their parallel reactors:

"Optoacoustically mode-locked fibre lasers based on micro-core PCFs, which have been developed in our lab for many years, make use of the enhanced optoacoustic interactions in the micro-core PCF. When inserted in a conventional mode-locked fibre laser, the PCF provides an acoustic resonance, typically at GHz rate, through which the meters-long fibre cavity can be effectively divided into hundreds of time-slots, each corresponding to one acoustic vibration cycle, leading to the formation of an optomechanical lattice. Each time-slot, or "lattice cell" can host multiple solitons that are isolated from other time-slots and can be manipulated, functioning as many parallel reactors in which the reactants are optical solitons instead of real atoms and molecules."

"The major breakthrough of this work is the on-demand control of the soliton interactions in each parallel-reactor hosted by the optomechanical lattice. We categorized the methods into two types. One relied on laser cavity perturbations that affect all reactors simultaneously, which is called 'global control'. The other utilize external addressing pulses to induced perturbations upon selected reactors without affecting the others, which is called 'individual control'. Phase-uncorrelated long-range soliton interactions play an important role in such controlled interaction. The controlled synthesis and dissociation of soliton molecules are actually enabled by careful tailoring of the long-range soliton interactions."

"By careful adjustment of the laser cavity, we have successfully initiated hundreds of soliton-molecule synthesis/dissociation events in parallel. We employed the dispersive Fourier transform (DFT) method to capture the transient multi-soliton dynamics in each reactor. By analyzing these massively parallel events recorded in the experiment, which are unavailable in previous studies, we have unveiled many features of multi-soliton dynamics, including a few statistical rules that emulate classic chemical kinetics, suggesting a collective-level matter-light analogy."

"The presented technique offered a series of new possibilities for studying optical solitons. Many phenomena concerning soliton dynamics can possibly be re-examined using such parallel-reactor scheme to gain a collective-level insight. The various control technique, especially the individual control methods that enabled selective editing of multi-soliton states, can be potentially useful in optical information technology that use solitons as bit-carriers. We also expect the concept of parallel reactors to be realized in other platforms, e.g. using a massive array of micro-resonators." the scientists forecast. 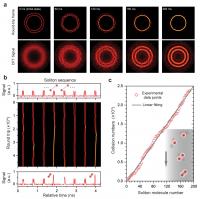