A contentious debate among diabetes researchers has surrounded the regeneration of pancreatic insulin-producing cells: not if these cells regenerate, but rather how.

The long-held view that the islets of Langerhans can be replenished from pancreatic stem cells (progenitors) was replaced over the last decade by the notion that islets self-duplicate from existing cells. Now, in a manuscript published online in Trends in Endocrinology & Metabolism, scientists from the Diabetes Research Institute at the University of Miami draw categorical conclusions in support of the original theory that progenitors in the pancreas do exist and, moreover, that these stem cells may regenerate in human patients. The ability to regrow a person's own insulin-producing cells would address a major challenge in type 1 diabetes and represent a significant step toward developing a biological cure for this life-threatening disease.

"We have demonstrated that there are progenitors in the adult pancreas, not only in mice but in humans, which is a very important clarification, and that those cells can potentially be stimulated through pharmacological means to induce regeneration in patients with type 1 diabetes. That is the 'Holy Grail' of what we are trying to achieve here at the DRI," said Juan Dominguez-Bendala, Ph.D., director of pancreatic stem cell development for translational research and co-author of the paper with Ricardo Pastori, Ph.D., director of molecular biology.

In the 1980s, researchers logically concluded that the pancreas harbors progenitor cells capable of regenerating endocrine (insulin-producing) cells after an islet was photographed sprouting from an adult pancreatic duct. Over the three decades that followed, dozens of reports further reinforced the idea that a variety of growth factors could stimulate ductal cells to differentiate into all pancreatic cell types, including insulin-producing cells.

That long-standing view was challenged in 2004, when tests using lineage tracing (LT), a technique that tracks the origin of a cell's development, performed in mice, showed that the insulin-producing cells were replenished by replication of existing cells, rather than from the growth of new ones. While the study did not disprove the existence of progenitor cells, it succeeded in shifting the prevailing thought in the scientific community.

According to the DRI team, however, those conclusions were largely derived using an unreliable tool in an inadequate model. Striking differences between islets of mice and humans are not simply a matter of scale. There are vast anatomic and functional differences between the islets of these two species that call into question the validity of the mouse model to draw conclusions about pancreatic regeneration in humans.

The use of lineage tracing in rodents has also yielded contradictory results. While LT is a powerful tool that has been used for several decades to track the path and origins of stem-cell maturation, it has a number of limitations and carries a potential bias in scientific outcomes.

"The hypothesis that the pancreas harbors progenitor cells has been discredited for a number of years, but we believe that many of the techniques used to reach that conclusion were flawed. We have found profound differences in the behavior of human cells vs. mouse cells in the pancreas and we think it's important to highlight and emphasize the regeneration processes in human cells," said Dr. Dominguez-Bendala. "Clearly, our work and the work of others is actually contributing to the notion that we have stem cells in the adult pancreas, and that we can potentially exploit those cells to our benefit for the treatment of type 1 diabetes."

Harnessing the Body's Ability to Heal Itself

Type 1 diabetes is an autoimmune condition in which the insulin-producing cells of the pancreas have been mistakenly destroyed by the immune system, requiring patients to manage their blood sugar levels through a daily regimen of insulin therapy. Islet transplantation has allowed some patients with type 1 diabetes to live without the need for insulin injections after receiving infusions of donor cells. However, there are not enough cells to treat the millions of patients who can benefit. Thus far, research efforts have focused primarily on creating more pancreatic cells for transplant from sources like embryonic (hESc), pluripotent (hPSc) and adult stem cells, and porcine (pig) islets, among others. A more efficient and potentially safer solution could lie in regenerating a patient's own insulin-producing cells, sidestepping the need to transplant donor tissue altogether and eliminating other immune-related roadblocks.

"If we could give the patient something that will promote the proliferation and subsequent differentiation of those cells that are already in the pancreas into beta cells while controlling autoimmunity, we could harness the natural ability of the body to heal itself. We think that would open a whole new therapeutic horizon," said Dr. Dominguez-Bendala.

Trends in Endocrinology and Metabolism

Is the pancreas regeneration debate settled? An original theory renewed 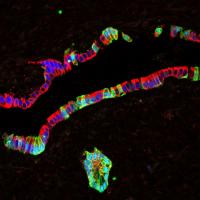