A 1,500-year-old treasure: Three figurines of Aphrodite, goddess of love, hidden during the era of the Roman Empire's transition to Christianity, discovered in Hippos (Sussita) *During the tenth season of excavations, under the directorship of Prof. Arthur Segal and Dr. Michael Eisenberg of the University of Haifa, a public building was also exposed, the first of its kind in Israel.*

An ancient treasure comprising three figurines of Aphrodite, the goddess of love, which was buried underground for over 1,500 years, was uncovered during the tenth season of excavations that are carried out by researchers of the Zinman Institute of Archaeology at the University of Haifa, headed by Prof. Arthur Segal and Dr. Michael Eisenberg. "It is possible that during the fourth century A.D., when Christianity was gradually becoming the governing religion in the Roman Empire, there were still a number of inhabitants in Sussita who remained loyal to the goddess of love and therefore wished to hide and preserve these items," suggests Prof. Segal.

The hidden figurines were discovered when the researchers exposed a shop in the southeastern corner of the forum district of Sussita, which is the central area of the Roman city that was built in the second century B.C., existed through the Roman and Byzantine periods and destroyed in the great earthquake of 749 A.D. According to the researchers, it was clear that the followers had wished to hide the figurines, as they were found complete. The clay pieces are 23 cm tall and represent the common model of the goddess of love known to the experts as Venus pudica, "the modest Venus." This name was given to the form due to its upright stature and the figure's covering her private parts with the palm of her hand – perhaps another reason for concealing them from the new religion that presided over the empire.

The tenth excavation season at Sussita, which is located on the mountaintop at an altitude of 350 m. above Lake Kinneret and in the area of the Sussita National Park, yielded many spectacular findings. Besides the University of Haifa researchers, also participating in the excavations were teams from the Polish Academy of Sciences in Warsaw and from Concordia University of Minnesota, USA. The project was carried out with significant support from the Israel Nature and Natural Parks Protection Authority.

Another fascinating finding was an odeion – a small, roofed theater-like structure, the first of its kind to be exposed in Israel. According to the researchers, structures such as these were quite common in the Roman era and were intended for poetry-reading performances and musical recitals for an elect audience. While the average theater of those times had some 4,000 seats, the odeion had no more than 600 sitting places. The exposure of this structure holds within it an intriguing story. In the 1960s, when it served as a military post, this area of the city was still entirely covered with refuse three meters high as a protective military measure. When the archaeologists began digging down in 2008, all that could be seen above ground were three hewn stones. The researchers then proposed a theory that these stones hid beneath them an odeion structure, of the type that had not been found before in Israel. To their surprise, this theory proved correct. The excavation is still in its early stages, but the researchers have already been able to expose the entire perimeter of the odeion, which forms a rectangular area, at one end of which is a semi-circle. According to the researchers, the construction is of high quality and it seems that it can be dated back to the first century B.C. or A.D.

Also found in the excavations was a basilica, a roofed structure that would have been used as a substitute location for public gatherings in rainy weather. This is the second basilica to be exposed in Israel, the first being the Roman basilica of Samaria. The conservation and restoration team working alongside the archaeologists have succeeded in restoring one of the basilica's columns. "Just the look of the restored columns is enough to get an impression of the beauty and tremendousness of Roman architecture during that period," Prof. Segal exclaimed.

The American delegation exposed a living quarter, most likely dating back to the fourth century A.D., which gives a rare glimpse into the day-to-day lives of the inhabitants of Sussita during the last three centuries of the city's existence. All of the houses that were exposed surround a stone-paved courtyard. The researchers assume that this style of planning is evidence of everyday household activity taking place in the courtyard, including the cooking.

"At the close of the tenth season of excavations, we have revealed an abundance of public structures in the city, most likely associated with the reign of Herod in the first century B.C. Until now we have assumed that the wave of construction that took place during Herod's reign was primarily in Jewish cities, but the findings at Sussita are evidence of the king's influence on pagan cities under his rule too," the researchers concluded. 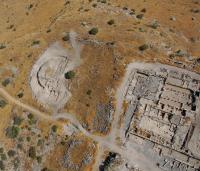 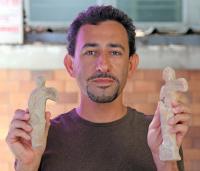