Researchers at the University of Alberta have discovered a novel, second mechanism of action by the antiviral drug remdesivir against SARS-CoV-2, according to findings published today in the Journal of Biological Chemistry.

The research team previously demonstrated how remdesivir inhibits the COVID-19 virus’s polymerase or replication machinery in a test tube.

Matthias Götte, chair of medical microbiology and immunology in the Faculty of Medicine & Dentistry, likened the polymerase to the engine of the virus. He said the first mechanism the team identified is like putting diesel fuel into an engine that needs regular gasoline.

The newly identified mechanism is more like a roadblock, “so if you want to go from A to B with the wrong fuel and terrible road conditions, you either never reach B or you arrive extremely late,” Götte said.

“Remdesivir stops or heavily delays replication of the virus, which in turn reduces propagation and spread.”

Götte said it is not common for antiviral drugs to have more than one mechanism of action. The first mechanism his team uncovered affects what is known as the “primer strand” of RNA or the first copy the virus makes of the viral genome as it infects a cell. The second mechanism affects the “template strand” which is repeated over and over as the virus spreads.

Clinical trials of remdesivir in COVID-19 patients are underway around the world, including one run by the U.S. National Institutes of Health which reported preliminary results showing the average recovery time for treated patients was shortened to 11 days compared with 15 days for the placebo group.

Götte said it is important to know how remdesivir works because it is the only direct-acting antiviral currently approved for conditional and/or emergency use as a COVID-19 treatment in several countries, including Canada and the U.S.

“That means remdesivir is a benchmark that we need to understand in great detail in order to build on it and to improve therapies in the future,” Götte said.

Next steps for human trials and laboratory studies

Götte said that while remdesivir looks promising in laboratory tests and in cell cultures, he is anxious to see more results from human clinical trials, in particular how remdesivir affects the “viral load” or amount of virus in patients.

“Is there a difference as to whether somebody has a low viral load from the beginning or a high viral load? We don’t know that yet,” he pointed out.

He said laboratory results can differ from human trials because there could be reservoirs of the virus in the human body that the drug does not reach. SARS-CoV-2 may also develop resistance to the drug, although he thinks this will be difficult based on what is known about how remdesivir interacts with other coronaviruses.

“We need these data to help us to better understand which patients will benefit from remdesivir,” he said.

Götte’s lab will continue trying to understand more about how remdesivir and other polymerase inhibitors work against SARS-CoV-2 to aid drug discovery and development.

The research was supported by the Canadian Institutes of Health Research, Gilead Sciences and the Alberta Ministry of Jobs, Economy and Innovation. 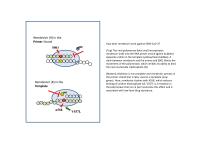 How does remdesivir work against SARS-CoV-2?