A low pressure area in the Atlantic Ocean, located southwest of the Azores was designated as Subtropical Depression One on April 19 as NASA examined its rainfall. By April 20 it had become the Atlantic's first tropical depression.

Just as the subtropical depression was forming in the North Atlantic Ocean on April 19 at 11 a.m. EDT (1500 UTC) the Global Precipitation Measurement Mission or GPM core observatory satellite flew directly over it and identified areas where rainfall was heaviest in the system.

Data collected by GPM's Microwave Imager (GMI) and Dual-Frequency Precipitation Radar (DPR) instruments April 19, 2017 at 0746 UTC (3:46 a.m. EDT) showed moderate to heavy rainfall within the low pressure area. DPR revealed that rain was falling at a rate of over 30 mm (1.2 inches) per hour in showers located to the east of the low's center of circulation. GPM's radar (DPR Ku Band) also showed that a few storms rotating around the low pressure center were dropping rain at a rate of almost 36 mm (1.4 inches) per hour.

At NASA's Goddard Space Flight Center in Greenbelt, Maryland, a 3-D examination was created using GPM's Radar (DPR Ku Band) data. That 3-D analysis showed most of the storms around the low pressure area were fairly shallow. Some of the highest storm tops just to the west of the low's center of circulation were found by DPR to reach altitudes above 11 km (6.8 miles). GPM is a joint satellite mission between NASA and the Japan Aerospace Exploration Agency, JAXA.

At the time of formation, the National Hurricane Center (NHC) determined that it was a sub-tropical low pressure area. The difference between this and a tropical cyclone is found in the temperature structure. This low had a cold core while tropical cyclones that normally form in the tropics, are warm core. That changed on April 20 at 11 a.m. EST when it was designated a tropical depression and developed a warm core. At that time NHC's discussion noted "Conventional satellite imagery indicate that the convection, although not very deep, has become more symmetric around the center, suggesting that the subtropical cyclone has transitioned into a tropical depression."

At 11 a.m. EST (1500 UTC), the center of Tropical Depression One was located near 36.1 degrees north latitude and 40.0 degrees west longitude. That's about 730 miles (1,170 km west of the Azores. The Azores are an archipelago in the mid-Atlantic Ocean. The depression was moving toward the northwest near 14 mph (22 kph), and that general motion is expected to continue until dissipation. Maximum sustained winds were near 35 mph (55 kph) with higher gusts. The estimated minimum central pressure is 996 millibars (29.42 inches). 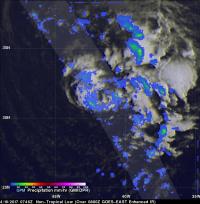 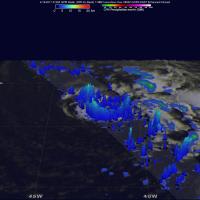