New research from the University of Washington suggests that the Egyptian fruit bat is using similar techniques to those preferred by modern-day military and civil surveillance. The results could inspire new directions for driverless cars and drones.

The new open-access paper in PLoS Biology shows how the animals are able to navigate using a different system from other bats.

"Before people thought that this bat was not really good at echolocation, and just made these simple clicks," said lead author Wu-Jung Lee, a researcher at the UW's Applied Physics Laboratory. "But this bat species is actually very special -- it may be using a similar technique that engineers have perfected for sensing remotely."

While most other bats emit high-pitched squeals, the fruit bat simply clicks its tongue and produces signals that are more like dolphin clicks than other bats' calls. Fruit bats can also see quite well, and the animals switch and combine sensory modes between bright and dark environments.

An earlier study showed that Egyptian fruit bats send clicks in different directions without moving their head or mouth, and suggested that the animals can perform echolocation, the form of navigation that uses sound, better than previously suspected.

"But no one knew how they do it, and that's when I got excited, because there's something going on that we don't understand," Lee said.

Lee and colleagues measured the animals in the "bat lab" at Johns Hopkins University by capturing high-speed video and ultrasonic audio of bats during flight to study the mechanism of their behavior and navigation.

In measuring echolocation signals from fruit bats with a three-dimensional array of microphones, Lee did not solve the mystery of the seemingly motionless tongue clicks, but she did notice something strange. The beam of different frequencies of sound waves emitted by the bats do not align at the center and form a bullseye, as one would expect from a simple sound source, but instead the beam of sound is off-center at higher frequencies.

Lee recognized the pattern as a common one in radar and sonar surveillance systems. Invented in the early 20th century and now used throughout civil and military applications, airplanes, ships and submarines emit pulses of radio waves in the air, or sound underwater, and then analyze the returning waves to detect objects or hazards. While a simple single-frequency sonar has a tradeoff between the angular coverage and image sharpness, a "frequency-scanning sonar" solves this problem by pointing different frequencies of sound at slightly different angles to get fine-grained acoustic images over a large area.

Lee wondered if the fruit bats could be using the same technique when echolocating. She created a computer model of what might happen when the tongue click from the front of the mouth travels out and passes between the bat's lips. The elongated shape of the bat's mouth creates varying distances between the sound source and the gaps between its teeth, and this creates positive or negative interference between sound waves of different frequencies. The result, Lee's model shows, is that different frequencies point in different directions -- just as a frequency-scanning sonar would act.

"For me, what's exciting is the idea that you almost have a convergence between a system that was evolved, and the effects are very similar to what we have invented as humans," Lee said. "This is not the classic case where we learn from nature -- we found out that the bat may be doing the same thing as a system we invented many years ago."

(Sound doesn't have to pass between the bat's teeth, just through its lips, as the researchers discovered from one toothless bat.)

After doing calculations with a rough approximation of the bat's skull shape, Lee worked with co-author Jessica Arbour in the UW Department of Biology to get a CT scan of an actual fruit bat's skull. Incorporating an anatomically correct skull shape in the model confirmed the results. Though Lee can't say exactly what's happening inside the bat's mouth when a tongue click is produced, she believes her model suggests that could be how the bat creates its sonar beams.

This mechanism might be a simple evolutionary solution -- the Egyptian fruit bat looks like closely related bat species that don't echolocate, and also has large eyes. This means the shape of its head has not changed through evolution. From an engineering point of view this simplicity offers a similar benefit.

"You don't have to do anything, you just have to get the distance right. It's by design," Lee said. "This may be a way to produce a very cheap sensor that has this kind of sensing capability."

Other co-authors are Benjamin Falk, Chen Chiu and Cynthia Moss at Johns Hopkins University and Anand Krishnan at the Indian Institute of Science Education and Research, Pune. The research was funded by a UW-APL SEED postdoctoral fellowship, an Acoustical Society of America postdoctoral fellowship, the U.S. National Science Foundation, the U.S. Office of Naval Research, the U.S. Air Force Office of Scientific Research, the France-based Human Frontier Science Program, and the Government of India. 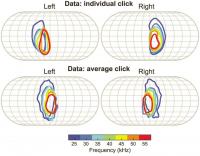