DALLAS - Oct. 7, 2020 - Endocannabinoids, signaling molecules produced in the body that share features with chemicals found in marijuana, can shut down genes needed for some pathogenic intestinal bacteria to colonize, multiply, and cause disease, new research led by UT Southwestern scientists shows.

The findings, published online today in Cell, could help explain why the cannabis plant - the most potent part of which is marijuana - can lessen the symptoms of various bowel conditions and may eventually lead to new ways to fight gastrointestinal infections.

Discovered in 1992, endocannabinoids are lipid-based neurotransmitters that play a variety of roles in the body, including regulating immunity, appetite, and mood. Cannabis and its derivatives have long been used to relieve chronic gastrointestinal conditions, including irritable bowel syndrome and inflammatory bowel disease. Studies have shown that dysregulation of the body's endocannabinoid system can lead to intestinal inflammation and affect the makeup of gut microbiota, the population of different bacterial species that inhabit the digestive tract.

However, study leader Vanessa Sperandio, Ph.D., professor of microbiology and biochemistry at UTSW, says it's been unknown whether endocannabinoids affect susceptibility to pathogenic gastrointestinal infections.

To help answer this question, Sperandio and her colleagues worked with mice genetically altered to overproduce the potent mammalian endocannabinoid 2-arachidonoyl glycerol (2-AG) in various organs, including the intestines. When the researchers infected these animals and their unmodified littermates with Citrobacter rodentium, a bacterial pathogen that attacks the colon and causes marked inflammation and diarrhea, the mutant mice developed only mild symptoms compared with the more extreme gastrointestinal distress exhibited by their littermates. Examination of the mutant animals' colons showed far lower inflammation and signs of infection. These mice also had significantly lower fecal loads of C. rodentium bacteria and cleared their infection days faster than their unmodified littermates. Treating genetically unmodified animals with a drug that raised levels of 2-AG in the intestines produced similar positive effects.

Conversely, when the researchers treated mammalian cells in petri dishes with tetrahydrolipstatin, a Food and Drug Administration-approved compound sold commercially as Alli that inhibits 2-AG production, they became more susceptible to the bacterial pathogens.

Further experiments showed that 2-AG exerted these effects on C. rodentium, S. typhimurium, and E. coli by blocking a bacterial receptor known as QseC. When this receptor senses the host signaling molecules epinephrine and norepinephrine, it triggers a molecular cascade necessary to establish infection. Plugging this receptor with 2-AG prevents this virulence program from activating, Sperandio explains, helping to protect against infection.

Sperandio notes that these findings could help explain some of the effects of cannabis use on inflammatory bowel conditions. Although studies have shown that cannabis can lower inflammation, recent research has shown that these conditions also tend to have a bacterial component that might be positively affected by plant cannabinoids.

In addition, cannabis compounds or synthetic derivatives could eventually help patients kick intestinal bacterial infections without antibiotics. This could be particularly useful for infections caused by enterohemorrhagic Escherichia coli, Sperandio says, which produces a deadly toxin when it's treated with antibiotics, rendering these drugs not only counterproductive but extremely dangerous. Because many virulent bacteria that colonize areas elsewhere in the body also have the QseC receptor, she adds, this strategy could be used more broadly to fight a variety of infections.

"By harnessing the power of natural compounds produced in the body and in plants," she says, "we may eventually treat infections in a whole new way."

Sebastian E. Winter, Ph.D., an Associate Professor in Microbiology and Immunology, is a W.W. Caruth, Jr. Scholar in Biomedical Research.

Fighting intestinal infections with the body's own endocannabinoids 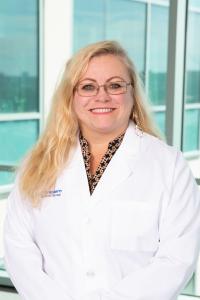