Devices that mimic the signal processing and functionality of biological systems can simplify the design of bioinspired system or reduce power consumption. The researchers said organic devices are advantageous because their functional properties can be tuned, they can be printed on a large area at a low cost, and they are flexible like soft biological systems.

Professor Tae-Woo Lee, a Professor at Seoul National University said, "Our artificial mechanosensory nerves can be used for bioinspired robots and prosthetics compatible with and comfortable for humans." Lee said, "The development of human-like robots and prosthetics that help people with neurological disabilities can benefit from our work." 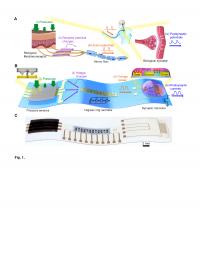