Researchers at the Centro Nacional de Investigaciones Cardiovasculares Carlos III (CNIC), working together with scientists at other national and international centers, have identified a mechanism that allows the Leishmania parasite, which causes leishmaniasis, to evade the immune system and thereby produce an infection. The study, published in Immunity, shows that a molecule produced by the parasite binds specifically to a receptor called Mincle (Clec4e) expressed on the surface of dendritic cells (a kind of antigen-presenting cell), sabotaging their function. There is currently no effective vaccine for leishmaniasis, and the research team speculates that the poor performance of vaccines derived from whole parasite extracts might be due in part to the presence of the Mincle ligand.

Leishmaniasis is transmitted to people through bites of phlebotomus sandflies. The disease mostly affects people in tropical and subtropical zones, but is also present in mediterranean countries, including Spain, where an outbreak occurred near Madrid in 2012. Dogs also act as resevoirs of the disease. World Health Organization data indicate a prevalance of 12 million infected people, with 1.3 million new cases and 20 000 to 30 000 deaths per year. Leishmania is one of the five most important parasites, and leishmaniasis belongs to a group of "forgotten diseases" because of its wide distribution, high incidence and resistance to control.

The most severe form of the disease, visceral leishmaniasis, also known as kala-azar, is characterized by episodes of fever, weight loss, hepatosplenomegaly, and anemia. Visceral leishmaniasis patients require immediate administration of a comprehensive treatment that is in many cases toxic and ineffective. Moreover, although patients who have survived leishmaniasis are resistant to reinfection, there is currently no effective vaccine. The parasite colonizes the patient's macrophages, which are simultaneously the location where parasites survive and replicate and the cells charged with eliminating them.

Abundant evidence indicates that the Leishmania parasite has evolved to manipulate and evade the host immune system, it is unknown exactly how these immune-inhibitory processes occur. The Immunity study demonstrates the role of the receptor Mincle (Clec4e) in blocking the immune system. This result is unexpected because Mincle generally transmits an activating signal in the dendritic cell that initiates the immune response. The new finding identifies Mincle as a possible target for future leishmaniasis treatments. David Sancho, lead author and head of the CNIC Immnuobiology Lab, explains that "the study reveals that the number of parasites detected after skin infection with Leishmania major in mice lacking Mincle is 90% below-normal, and as a result these mice have less skin disease."

First author Salvador Iborra explained that the Mincle-deficient mice showed an elevated adaptive Th1 response to the parasite. In the presence of Mincle, the parasite manages to weaken the immune response, allowing it to replicate and be transmitted. In contrast, the Mincle-deficient mice showed an early Th1 response, leading to rapid control of the parasite and blockade of disease progression. Joint first author María Martínez commented that "without Mincle, dendritic cells are able to migrate, mature, and activate T lymphocytes, and the mice therefore generate a more effective Th1 response."

Another important finding is that the inhibitory effect of Mincle is also observed after immunization of mice with dead Leishmania parasites. The authors speculate that the poor Th1 immunity generated with current vaccines might be due to the presence of a Mincle ligand in the total Leishmania extracts used. 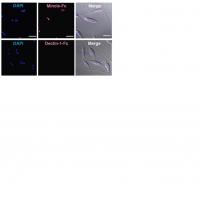