Scientists at the University of California San Diego have a much clearer idea thanks to the evolution of an advanced imaging system designed to record ultra-precise brain activities in flies.

Called "Flyception" when it was announced in 2016 as a system that could record freely walking flies, the new "Flyception2" employs a more advanced tracking and recording system that allows flies to move about uninhibited, allowing researchers to study brain activities during intricate behaviors.

The technology, which the researchers say has produced the first-ever picture of what happens in the brain during mating in any organism, is described in a paper published in Nature Communications.

"This technology has made it possible to record the animal while it's moving around completely untethered and unfettered in any sense," said Ralph Greenspan, a professor in the Division of Biological Sciences and Department of Cognitive Science, and associate director of the Kavli Institute for Brain and Mind (KIBM). "The strength of the system is that it gives us real-time information of what the cells in the brain are doing and an understanding of social behaviors."

Developed by first-author Dhruv Grover and coauthor Takeo Katsuki, Flyception2 features a groundbreaking design in which researchers surgically implant a transparent window on the fly's head. Three markers set triangularly on the window allow them to record ultra-fast movements--a rate of 20 millimeters per second for flies--while they interact with other flies, with cameras that track the animal and record at 1,000 frames per second.

Flyception2 recordings have revealed unprecedented insights of brain activities. For example, neuroscientists have long known that brain nerve cells called P1 neurons are active during courtship. This was confirmed with Flyception2 data--as a male fly approached a female, P1 activity ramped up. But the scientists were surprised to see that P1 neurons in male flies subsequently turned off during sex. Rather, the data revealed that a neuron known as mAL, which is tied to a GABA neurotransmitter, is switched on during copulation.

"Only by using this system were we able to obtain the surprise finding that P1 neurons are inactive during copulation," said Grover. "My hypothesis is that as mAL neurons turn on, P1 neural activity goes down, suggesting a countervailing effect of mAL in opposing P1 activity."

The initial results are the first step in tracking and dissecting a range of behaviors that Flyception2 allows scientists to study. Observing the female fly brain during courtship and mating is an untapped area of study, the researchers say.

"We hope this kind of technical advancement, which can only be done at this point in the fruit fly, can start to forge the way for other organisms," said Greenspan. "Scientists are starting to be able to draw parallels between which parts of the brain appear to have evolved from the same precursors in invertebrates and in mammals. As people do more of those molecular studies, we will be able to make those parallels in more detail."

In addition to Grover, Katsuki and Greenspan, coauthors of the study include Jinfang Li of KIBM and Thomas Dawkins of KIBM and the Department of Electrical and Computer Engineering at UC San Diego's Jacobs School of Engineering. 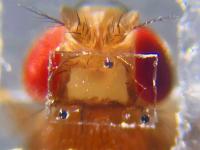