WASHINGTON - Mitochondria help injured muscle cells (myofibers) repair by soaking up calcium that enters from the site of injury and using it to trigger increased production of reactive oxygen species. Although reactive oxygen species can damage cells when produced in high amounts, according to a study published online Sept. 5, 2017 by Science Signaling and featured on the journal's cover, these oxidative species are crucial signals that start the process of repairing myofiber. Loading up mitochondria with excess antioxidants inhibits this signaling process, blocking muscle repair, exacerbating myofiber damage and diminishing muscle strength.

To make voluntary movements like climbing stairs, lifting a gym bag or swiping open a smartphone app, myofibers must produce force. The force that myofibers generate is transmitted across the muscle, causing stress that can injure the myofibers. Mitochondria serve as the cell's powerhouse and supply energy for producing force, but this process also makes reactive oxygen species as a by-product. Properly functioning mitochondria are needed not only for energy production, but also to repair injured myofibers.

"Our results suggest a physiological role for mitochondria in plasma membrane repair in injured muscle cells, a role that highlights a beneficial effect of reactive oxygen species," says Jyoti K. Jaiswal, M.S.C., Ph.D., principal investigator in the Center for Genetic Medicine Research at Children's National Health System, associate professor of genomics and precision medicine at The George Washington University School of Medicine and Health Sciences, and senior study author. "Our work highlights the need to take a nuanced view of the role of reactive oxygen species, as they are necessary when they are present at the right place and right time. Indiscriminate use of antioxidants actually could harm an adult with healthy muscles as well as a child with diseased muscle."

Antioxidants are widely used by Baby Boomers with muscles that ache from a grueling workout or newborns diagnosed with muscular dystrophy. Jaiswal and Children's National colleagues understand that their results buck conventional wisdom that antioxidants generally benefit muscle recovery.

"It is still a common belief within the fitness community that taking antioxidant supplements after a workout will help your muscles recover better. That's what people think; that's what I thought," says Adam Horn, lead study author, a graduate student at The George Washington University who works with Dr. Jaiswal at Children's National Health. "What we've done is figure out that mitochondria need to produce a very specific oxidative signal in response to muscle damage in order to help injured muscles repair."

The oxidative signals produced by mitochondria are delicately balanced by the antioxidant defenses in healthy cells. This balance can be disrupted in diseases such as Duchenne muscular dystrophy, which is caused by the lack of a muscle-specific protein, dystrophin. Lack of dystrophin makes the muscle cell plasma membrane more vulnerable to injury. In an experimental model of Duchenne muscular dystrophy, the muscles at birth are seemingly normal but, within weeks, show obvious muscle damage and progressive weakness.

"What changes? One of the things that changes in the third and fourth week of life of this experimental model is mitochondrial functionality," Jaiswal adds. "They end up with many dysfunctional mitochondria, which compromise repair of injured myofibers. This permits chronic and excessive oxidation of the myofibers and disruption of the proper oxidant-antioxidant balance."

In this case, a dose of antioxidants may restore that proper balance and help to reverse muscle damage and progressive weakness.

As a next step, the research team is examining oxidation in healthy and diseased muscle to understand how the oxidant-antioxidant balance is disrupted and how it could be restored efficiently by using existing supplements. In one such study funded by the National Institutes of Health, the team is looking at the potential benefit of vitamin E supplements for patients with muscular dystrophy.

"Antioxidant supplements are made from extracts of bark, sap, chocolate and other compounds so they're all different," Jaiswal says. "Knowing which ones can restore balance under a specific circumstance has the potential to help the body maintain proper cellular signaling ability, which will keep muscles healthy and working properly." 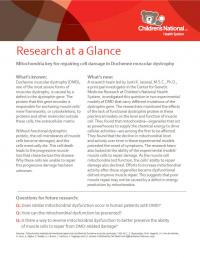