MADISON, Wis. — Field ecologists go to great lengths to get data: radio collars and automatic video cameras are only two of their creative techniques for documenting the natural world. So when a group of ecologists set out to see how wind moves seeds through isolated patches of habitat carved into a longleaf pine plantation in South Carolina, they twisted colored yarn to create mock seeds that would drift with the wind much like native seeds.

The "seeds" were dusted with fluorescent powder and inserted into custom-made boxes mounted on poles, then released as the scientists monitored local wind conditions.

That night, the field crew returned for a black-light treasure hunt, locating more than 80 percent of the fake seeds, which glowed under the ultraviolet light. The paths of these glowing seeds were matched with output from a computer model to produce the first accurate picture of how wind moves seeds through corridors linking two patches of habitat.

The study, published Feb. 24, 2014 in the Proceedings of the National Academy of Sciences, has echoes of an arts and crafts project, but it has a serious purpose. "Understanding the conservation impact of corridors is at the cutting edge of conservation," says first author Ellen Damschen, an assistant professor of zoology at the University of Wisconsin-Madison.

Corridors are designed to improve conditions for uncommon native species living in separated habitats. Small populations in these "islands" of habitat may be killed by storms or disease. They may lack genetic diversity and be prone to inbreeding. And they may be unable to reach new habitat.

For about 40 years, conservation biologists have discussed building conservation corridors to link isolated patches of protected land. "It makes intuitive sense that these connections could foster genetic and biological diversity," says Damschen, and large projects, including one linking Yellowstone National Park to Canada's Yukon Territory, are taking shape. "Unfortunately, there has been very little scientific evidence for if and how they work."

Most of the studies have concerned animals, she adds, even though plants provide the basic energy and structure to land ecosystems.

Wind matters for the movement of seeds and whole organisms, Damschen says. "In many open habitats, more than one-third of plants are wind dispersed, but there are also insects, spiders, pathogens and fungi that move on the wind."

The experiment, supported by the National Science Foundation and the U.S. Forest Service, began in 2000 with the creation of eight groups of identical patches at the Savannah River Site, a large holding of the Department of Energy in South Carolina. Each set of patches was built at a different orientation to prevailing winds.

The interdisciplinary research group of meteorologists and ecologists found that corridors increased the movement of wind and of their glowing artificial seeds, echoing the results of a computer model developed by Gil Bohrer at The Ohio State University. And when Damschen and fellow scientists in what they call the Corridor Research Group counted newly dispersed plants over the 12-year experiment, they found that a corridor linking two patches of land indeed promotes the diversity of plants dispersed by wind — especially if the corridor is oriented roughly parallel to the prevailing winds.

Both data and the model showed that wind speeds up in certain areas of the patches, and that a strong vertical air movement is present. "Uplift is important because the wind tends to be faster higher above the ground," Damschen says, "and uplift can lead to long-distance dispersal, which is most significant for moving plants around the landscape."

And that is why the study matters for conservation biology, Damschen says. "We predicted that corridors in line with the dominant wind would move more species, and this is what we found. Wind alignment matters for species diversity in conservation areas."

Their results are especially relevant to threatened Midwestern ecosystems like grasslands, prairies and savannas, where big bluestem and milkweed are two of the many important native plants that loft their seeds on the wind.

"In conservation science, it is often assumed that wind-dispersed seeds can go everywhere, but that's not true," Damschen says. "Wind direction, and the shape of the habitat, control where these seeds go. While this adds another factor to consider in management of natural areas, at least the information is on the table so we can make better decisions about how to achieve management goals."

Seed dispersal gets a test in carved-out 'habitat corridors'

Journal
Proceedings of the National Academy of Sciences
Funder
US Forest Service, 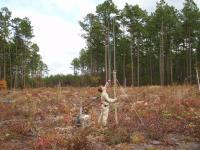