A study finds that the North African ant species Cataglyphis fortis can learn and retain up to 14 food-associated odors. Returning from foraging runs, desert ants switch from skylight compass navigation to olfactory cues, which are more precise, once in the vicinity of their nest. Roman Huber and Markus Knaden tested whether desert ants can also learn to associate a given odor with food. The authors set up a source of cookie crumbs 6 meters away from a nest and imbued each nest's crumb cache with an odor to which the ants were not innately attracted. On the next foraging journey, the ants were strongly attracted by the odor that had previously elicited no response. Further experiments revealed that the ants created the olfactory association after a single exposure and that they could store up to 14 food odor associations simultaneously, whereas they remembered only one nest-associated odor. The food associations remained for up to 26 days in nearly half the ants tested, a period longer than the ants' average life expectancy. According to the authors, differential retention of odor associations is likely to be adaptive, given that the ants generally have only one nest but many food sources. 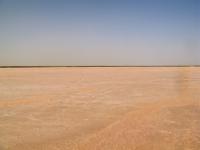