Could you taste the difference between cod and other whitefish, such as haddock or hake, if you didn't know what you were eating? The answer may have implications for supporting local fisheries and food sustainability in New England, says UMass Amherst environmental conservation graduate student Amanda Davis.

A research fellow at the UMass Amherst-based Northeast Climate Adaptation Science Center, Davis is exploring the reactions of UMass Amherst students and staff, born between 1980 and 2000, in a scientific sensory evaluation of five different whitefish sourced straight from the Boston Fish Pier: cod, dogfish, haddock, hake and pollock.

The study, funded by a seed grant from the UMass Amherst Institute for Social Science Research, is designed to explore "name bias" in seafood choices. Davis will present results in January at the winter science meeting of the American Fisheries Society's Southern New England Chapter in Cambridge.

The whitefish study grew out of Davis's interest in promoting local, sustainable seafood in New England. She is director of Our Wicked Fish, a newly founded, Deerfield-based nonprofit that strives to revitalize New England's fishing industry by educating consumers and connecting them with local seafood options.

It might come as a surprise, Davis notes, that despite the storied tradition of New England's fisheries - Cape Cod was named after the once-abundant fish, after all - most seafood offered in the Northeast U.S. today is imported. "We want to change that," Davis says. "How can we get consumers interested in eating whitefish other than cod? Hake, pollock and haddock taste as good and are not as expensive."

After decades of overfishing, the Atlantic cod (Gadus morhua) population is being managed by NOAA Fisheries under a long-term sustainability plan that limits harvest, which affects price and the commercial fishing industry.

Davis hopes the study - a multidisciplinary collaboration among the School of Earth and Sustainability, the Department of Food Science and UMass Dining - might show the UMass Amherst campus and beyond that it's worth trying other whitefish, which in turn could increase the demand for these locally sourced fish at UMass Dining locations.

The study was conducted last week at the Hampshire Dining Commons, where assistant food manager and certified chef Geoffrey McDonald painstakingly prepared one-ounce portions of each fish, seasoned only with the same amount of salt. He steamed eight fillets per pan at the same temperature for the same period of time.

"I've always been interested in food science, and the sustainability efforts for seafood are very important," McDonald says. "I'm interested to see the results, especially for dogfish, because it's still considered unusual but can be very tasty."

The first session was blinded - the 68 participants did not know the identity of the fish they were tasting. On an iPad, they rated the fillets' appearance, color, aroma, flavor and texture, and were asked if they would order the fish at a restaurant and at UMass. "I like that students got to taste different fish and not have to worry about the price or the name," Davis says.

Two days later, the participants returned to Hampshire Dining Commons to taste and rate the same five fish - but this time, each fillet was identified. Davis will be able to compare the results from the two taste tests to measure whether any name bias exists.

The project illustrates the multidisciplinary collaboration typical of UMass Amherst sustainability efforts. Ezra Markowitz, associate professor of environmental conservation, helped create a survey that all participants completed before the first sensory evaluation session. It gathered information about each participant's seafood consumption behavior and evaluated their level of trust in different providers of seafood sustainability information, such as eco-labels, government agencies and scientists.

One student-participant mused as she left the taste test: "I realized I like fish more than I thought." 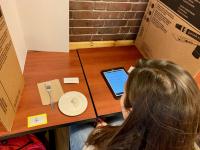