Provo, Utah - In time for Christmas, BYU nutritionists are squeezing all the healthy compounds out of oranges to find just the right mixture responsible for their age-old health benefits.

The popular stocking stuffer is known for its vitamin C and blood-protecting antioxidants, but researchers wanted to learn why a whole orange is better for you than its components when taken separately. The ultimate outcome of the research could be a super-supplement that captures the best health benefits of eating oranges and drinking orange juice.

"There's something about an orange that's better than taking a vitamin C capsule, and that's really what we're trying to figure out," said Tory Parker, BYU assistant professor of nutrition, dietetics and food science. "We think it's the particular mixture of antioxidants in an orange that makes it so good for you."

The team published the best health-promoting combinations of those natural antioxidants in a recent issue of the Journal of Food Science. The paper's lead author, Brenner Freeman, was a BYU undergrad when he conducted the research.

Now applying to medical schools, Brenner chose to study oranges because he was raised on a citrus orchard in Arizona.

"I spent a lot of time hunched over a lab bench in the dark doing this research," Freeman said. "But what I learned was worth it, and having this publication definitely gives me an advantage on my med school applications."

Parker explained that every time we eat carbs and fat, we increase the amount of free radicals in our blood. Over time, that increases our chance for hardened arteries and heart disease. But eating fruit protects us from that effect for a few hours after every meal.

"Carbs and fat increase free radicals, and fruit and internal antioxidants counteract that," Parker said. "That means fruit should be your dessert – remember, before cookies, candy and other sugary snacks became so widespread, fruit was our 'sweet.'"

Parker noted supplement companies often mix "high concentrations of extracts from blueberry and blackberry and orange and throw them all together and hope it's good."

He wanted to avoid such assumptions by testing dozens of combinations of the antioxidants found in an orange at the same proportions they occur naturally.

"We're looking for synergistic effects," Parker said. "Cases where the effect of two or more antioxidants together was stronger than the sum of them separately."

In conclusion, they identified several combinations of antioxidants that were the most synergistic – the compounds hesperidin and naringenin, in particular, appeared to contribute the most punch in the combinations.

Those are the mixtures Parker will continue to research in human studies to evaluate whether their health effects mimic those of eating an orange. He and his students are also conducting similar work with blueberries and strawberries.

BYU has applied for patents on the best antioxidant mixtures from all three fruits, and they are available for license by companies for further development.

"I'm really most interested in protecting healthy people and keeping the healthy, healthy," Parker said. "And no matter what our research finds, it's very clear that a great way to do that is to simply eat more fruit."

The orange in your stocking: researchers squeezing out maximum health benefits 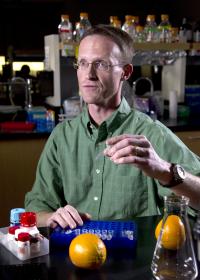